Make Mine a Machete

You can keep the axes and hatchets, I'll stick with my machete. 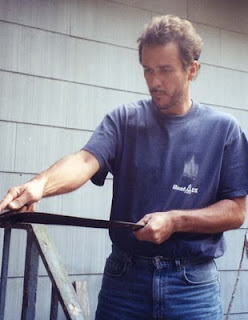 The author putting an edge on with a mill file.

Anyone who has spent any time adventuring in the tropical regions of the world has surely seen the many uses of the ubiquitous machete. Variations of this extremely versatile tool are found around the globe in the hot climates of the lower latitudes, but surprisingly, the machete is under utilized in temperate zones such as North America. Sometimes referred to as jungle knives, it’s easy to see why these long cutting tools are popular in the tropics. For cutting your way through thick underbrush and vines, a more effective tool has never been invented. But the common machete finds thousands of uses in Third World countries, from butchering meat to cutting firewood and even building houses. Machetes are cheap, lightweight, and easily carried in a sheath that can be slipped into a backpack, canoe dry bag or worn on the belt.

Given these advantages, it’s surprising that more survivalists and other outdoors enthusiasts do not make the machete a standard item on their gear checklist. One reason for this is the north woods tradition of using axes or hatchets for chopping and cutting tasks, rather than long knives. Few wilderness travelers really have need of an axe however, as this heavy and cumbersome tool is best used for serious tree cutting and jobs such as splitting large quantities of firewood or building a cabin. This sort of woodcraft is rarely necessary unless you are in a secure bug-out location where you plan to stay for an extended period of time.

An alternative to the axe - the hatchet is meant to be a scaled down axe that is handy to carry and can be used to cut smaller pieces of wood to build campfires.  But it’s really a poor substitute for an axe in this capacity, and a good machete with a sharp blade can handle all your firewood cutting tasks and can also be used to fell small trees in an emergency situation where you might need to build a survival shelter.

The one job that axes and hatchets cannot handle at all that machetes excel at is cutting trail through dense brush. The narrow cutting surface of only 3-4 inches on an axe or hatchet blade is useless for cutting vines, springy branches, cane, or dense grasses. With a sharp machete, you can wade through such undergrowth with ease, the long blade clearing a wide swath with each stroke. In jungles around the world, native people who are experts with machetes can clear trail almost as fast as they can walk. In some places it's almost impossible to travel without one.  Aside from tropical jungles, the cutover land and second growth forest found in much of the U.S. abounds in briar patches and other dense undergrowth that forms walls of vegetation.  The same is true in many swamps where impenetrable canebrakes or palmetto thickets occur, and even in some mountain areas.  On numerous occasions, I have spent days at at a time bushwhacking off trail in the Appalachian Mountains where rhododendron thickets made walking practically impossible without a machete.

The machete can also perform many of the tasks you might need a knife for, as it can be used to cut almost anything, including chopping up vegetables and other food items. With a good machete, you can eliminate carrying a large camp knife and take only a small pocket knife or multi-tool for delicate tasks.

Although all machetes are cheap compared to fine knives, it’s worth spending a few extra dollars to get a good one. The bottom of the barrel variety usually cannot be sharpened to a fine edge. The best machetes are the imported ones from Central and South American countries, where the makers know and understand what qualities a machete should have. Look for a blade of spring steel that can be flexed, but avoid the flimsiest, lightweight blades and get one with some heft. Much of the effort of cutting is eliminated by letting the weight of the blade do the work.

Blade length is another consideration. Machetes typically range in length from 18 inches to as long as 30 inches. The shortest variety is handy for many tasks, but I prefer a blade of about 24 inches for all-around usefulness. This length will still fit inside a backpack and it is long enough to have the necessary weight for serious cutting. Many jungle dwellers that use their machetes daily prefer the longer 30-inch blades because they cut even better.

To keep your machete razor sharp, you will need a small mill file. Knife sharpening stones are too slow for putting an edge on such a big blade, but they can be used for the final honing after you’re done with the file. Don’t try to carry a sharp machete without a good sheath. The best ones are made of leather and many imported machetes come with nice, hand-made leather sheaths. Remember that the machete is an extremely dangerous implement that can cause horrendous damage if you cut yourself or a bystander who is too close to where you are working. Always keep the edge away from yourself and others and be especially careful of your legs and feet while cutting brush in front of you.
Posted by Scott B. Williams at 4:21 AM