Minimal Bug Out Kit for EDC

Bug out bag checklists usually focus on a full-sized kit of everything you would need for at least the first 72-hours after leaving home.  In the case of a long-term bug-out situation, the bag will also include things you will need to sustain yourself for much longer - such as tools and hunting weapons to make shelter and gather food in the wild.  It is this end of the spectrum that is my focus in Bug Out

, where I assume circumstances that make you leave in the first place will be so bad you that you won't be able to return in a short time, such as 72-hours.

But what about all those times in everyday life when you will not have your bug-out bag nearby, perhaps when you're at work, or traveling on some form of public transportation, or just out for walk or some other recreational activity?  This is where the extreme minimum bug-out kit comes in.  Such a kit is so small and compact that it can be considered an EDC (Every Day Carry) kit, and will only contain the most basic essentials that could make things easier for you if you suddenly have to run or evade with nothing but what's in your pockets or on your key chain.

The idea is nothing new, really.  Tiny pre-packaged kits and Altoid tin survival kits have been around awhile.  Just as with the larger bug-out bag, I don't care much for pre-packaged survival kits of any kind, as they tend to include things you probably don't need and may leave out other items that could be really important.  Such a kit may be fine for some folks though.  Here are some examples:

Many of these kits assume this will be the only gear you have and some people buy them thinking this will be all they need.  Those of us who are prepared are usually never far from our more serious gear and tools, including things like knives, machetes, a tarp, some drinking water, emergency food and a handgun or rifle.

The kind of kit I'm talking about here doesn't try to be a do-everything kit, so I'm not including things like fish hooks or snares - just the basics that you need start a fire, patch up a wound, or treat a minor illness like diarrhea, a bad headache, or an insect sting.  This kit also includes cutting blades and other basic tools like a can opener, as well as needles and thread to fix clothing, footwear, gear or even sew up a wound.  Then there's the means to treat questionable drinking water and something for sun protection or making a tourniquet.  Best of all, it isn't any more bulky than the average wallet, and will fit easily inside a coat pocket or one of the pockets of a pair of cargo pants or shorts. 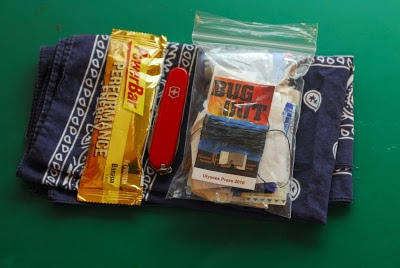 As you can see, when folded up inside the bandanna, it's hardly any bigger than a cell phone: 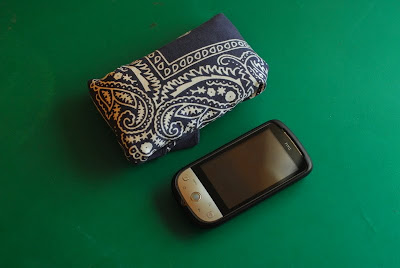 So what did I include in such a bare-minimum bug-out kit?  Here's the list:

, a compromise from my larger Leatherman but still usable
Bic lighter (make sure to keep a new one that's full, not one used for lighting your smokes)
One Fire Stick

1 folded, gallon-sized Ziplock freezer bag for use as a container in which to purify water
1 Power Bar for quick, emergency energy
Small Ziplock bag to contain all of above except Power Bar and Swiss Army Knife
Bandanna - kit wrapped inside, can be used for head protection, a large bandage, or tourniquet

A business card like mine shown below makes a good way to safely carry razor blades and needles.  I use a short length of blue painter's tape to secure the needles and blades to the card.  This tape can be unwrapped and reused multiple times without leaving a sticky residue.  After that's done, the Dacron thread is wrapped around the whole thing: 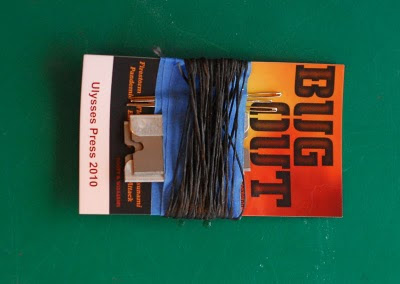 Here's the Bic lighter wrapped with duct tape, along with the Fire Stick and Swiss Army knife: 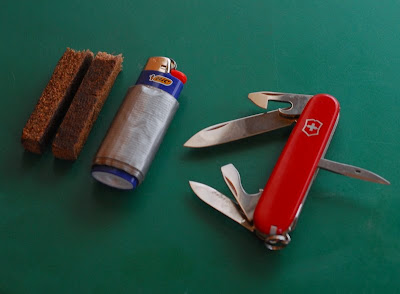 And the First Aid supplies: 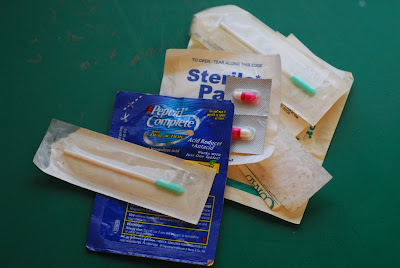 With the ability to carry so much useful stuff in such a small and lightweight package, it hardly makes sense to be without it.  The good thing about this kind of kit is that you can have it on you no matter what type of attire you're wearing or what activity you will be involved in.  I'm probably missing something you consider necessary for EDC.  I'd love to hear your suggestions and see photos of your own kits.
Posted by Scott B. Williams at 9:26 AM

Email ThisBlogThis!Share to TwitterShare to FacebookShare to Pinterest
Labels: bugging out, emergency equipment, evasion and escape