Whether considering a rifle for the bug out bag or for other purposes, I have a strong preference for short, handy carbines, and few rifles can meet that description better than the Winchester Model 1894 Trapper.  I've owned one chambered in .30-.30 in the past, but my current favorite is this one in .357 Magnum.  This is the pistol caliber carbine I mentioned in Bug Out

that goes along so well with a revolver chambered for the same round.  While I would still choose a compact .22 if I could only take one firearm for wilderness survival purposes, if at all possible, this handy little levergun will go along as well. 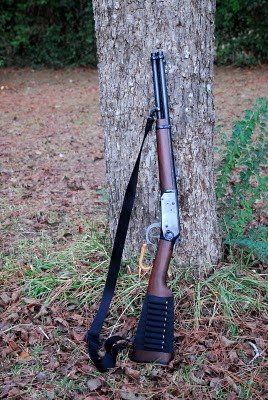 This slim lever-action rifle carries easily in the field, with or without a sling, and weighing only 6 lbs., it would be no great burden considering it's capabilities.  The .357 Magnum version is more than adequate for deer at reasonable ranges and can do the job for protection against dangerous animals, although I would choose the .44 Magnum or .30-.30 version if I were in big bear country.  The nice thing about the .357 Magnum is that it can also handle .38 Specials for smaller game and cheap plinking.  The only hitch with these rifles chambered in pistol caliber is that you have to experiment a bit with different brands of ammunition to find the ones that feed reliably.  This was never an issue with the .30-.30 I had.

Here, you can see just how compact this rifle really is, with an overall length of just 34 and a quarter inches. 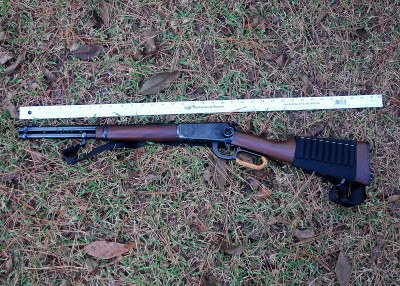 Here it is compared to a Saiga AK-47 with an ACE folding stock.  Overall length is very similar, but the AK is much bulkier and heavier.  Of course they have different purposes, but there is some crossover in the utility of each.  The Winchester is more refined in every way, with regards to fit and finish and within it's effective range it is more accurate, making it more suitable for survival hunting.  I love how quick it is to handle and how it comes to the shoulder and points naturally.  The AK is more of a beast, but with a whole lot more firepower potential with its 30-round mags, of course.  The Trapper in .357 Magnum holds 9 rounds in the tube plus one in the chamber. In .30-.30, this capacity is reduced to 5 in the tube.  But, one thing nice about a lever gun is that you can top off the magazine at any time between the shooting, adding rounds as soon as they are expended.  In a modern combat role, the lever action rifle that won the West is sometimes referred to as a "CAR" (Cowboy Assault Rifle)! 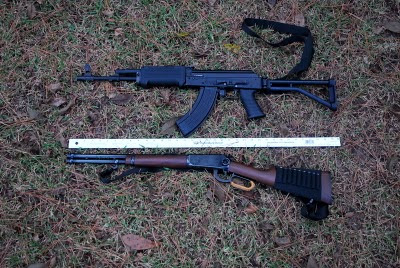 The Trapper version of this Winchester is short enough to fit in some large backpacks fully assembled.  I used to carry my .30-.30 that way, with the butt down and just a couple of inches of barrel protruding from under the backpack flap on my large external frame pack.  I would simply put a nylon tent pole bag over the end and when hiking in places where I might encounter some park ranger or game warden, they would never guess I had a rifle in there.  But if you really want to make it disappear, you can remove one screw and slide the butt stock right off, as shown below.  This leaves the longest part at 24 inches.  So many of the best bug out firearms options break down to 24 inches that I would never consider a backpack that didn't have a 24-inch deep compartment to be a valid choice for a serious bug out bag.

Keep in mind that this rifle was not intended to be taken down this way and I wouldn't do it all the time.  For bugging out purposes all you would have to do is break it down once to pack it and then put it together once you're out in the boonies.  By threading the screw back into the receiver you won't lose anything and you can carefully wrap and pad the receiver with spare clothing in the bag.  This is the same concept as packing the Ruger 10/22 the way I described it in a previous post. 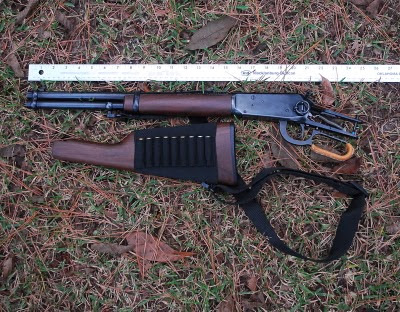 Here is another view of the Trapper and the AK, with the Trapper broken down and the AK's stock folded and magazine removed.  The AK is still bulkier, but it has the advantage that it can be fired in the folded position if necessary. 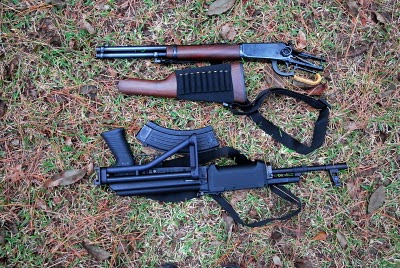 Now for the bad news.  Winchester stopped production on the Trapper several years ago, so what was once a $300 rifle has now soared in value as a collector's item.  I found the one pictured on Gun Broker last year in brand new condition for a reasonable price.  I've seen them going for as much as $1K, but if you look around, you might come across a used one at a gun show or in a pawn shop.  Other options that are similar and still in production are the Rossi Model 1892 and the Puma.  Marlin has also made limited runs of their lever carbines with a 16-inch barrel.

To explore the possibilities of the lever-action rifle as an alternative to semi-automatics like the AK-47 and the AR-15, I highly recommend you visit Gabe Suarez' Warrior Talk Forums.  Although Gabe is a guru of the modern AK-47 in a combat role, there is a sub-forum on Warrior Talk called "Fighting Lever Guns" that any fan of these rifles will find of interest, as there is lots of discussion on calibers and makes, as well as applicable tactics.  Gabe is also offering classes on gunfighting with lever guns. See below: