Here's a Bug Out Location from right here in my local stomping grounds in Mississippi: 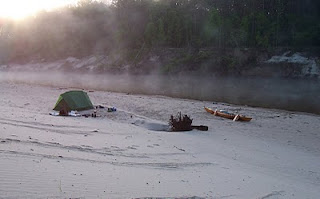 The Author's Sandbar Campsite on a Kayak Trip Down the Chickasawhay

Mississippi is blessed with fine rivers - many of which have long stretches of uninhabited bottomland hardwood and mixed pine forests along their banks.  The Chickasawhay is one such river, with more than 160 miles navigable by canoe, kayak or light John boat from its upper reaches near Enterprise to its confluence with the Leaf River, where the two merge to become the Pascagoula River.  The river winds through the sparsely populated counties of southeast Mississippi, which is not real wilderness by the definition of big tracts of roadless land, but is nevertheless remote enough in many stretches to serves as a viable bug-out location.  Hunting, fishing and foraging for edible plants is good along the entire course of the river. Deer, wild hogs, wild turkey, gray and fox squirrels, rabbits, armadillos, bass, bream and catfish are all especially abundant.

A Google Earth view of the upper Chicksawhay, near where the photo at top was taken. Big sandbars and heavily-forested banks are found along most of the river's course.

The areas along the river that are not naturally wooded in mixed pines or hardwoods are mostly forested in pine plantations at various stages of growth, so there is a buffer between the river and nearby roads, farms and dwellings along most of its route.  In a few places you will see open pasture land or scattered camp-houses, but for the most part a trip down the river is a journey through what feels like a much wilder area than it really is. 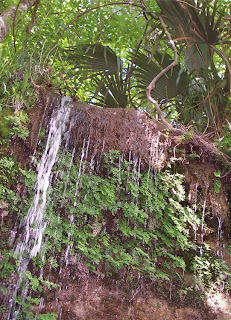 Some parts of the upper Chicksawhay are bounded by high bluffs of mixed clay and rock.  Springs like this one feed the main river and make finding drinking water easy. 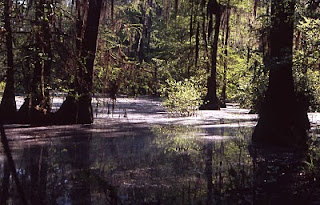 The farther downstream you travel, the bigger the river becomes.  Sloughs and oxbow lakes like this one off the main river become more common, and the bottomland hardwood forests become more extensive.

In 2004 my canoeing partner, Ernest Herndon, and I set out to paddle the entire Pascagoula River System from the headwaters to the Gulf of Mexico.  The Chicksawhay and the Leaf Rivers run mostly parallel to each other, with the Leaf to the west, until they merge together to form the Pascagoula, which runs another 80 miles before reaching the Mississippi Sound.  We spent two weeks on this trip, and wrote about our experiences in our co-authored book: Paddling the Pascagoula, linked below.  Having made this trip and many others on these waters, this would be one of my prefered bug-out locations if I had to hit the woods close to home here in Mississippi.