Book Two of the Feral Nation Series Has Been Released!

Thanks to reader interest in my latest post-apocalyptic series, I have been able to complete and publish the first two books of the series this year as planned. Feral Nation - Insurrection: Book Two of the Feral Nation Series was released today in both the Kindle edition and paperback.

The second book picks right up where Book One left off, with Eric Branson and his new sidekick, Jonathan, getting ready to set sail from south Florida to cross the Gulf of Mexico to Louisiana, where Eric's brother is a deputy sheriff in a rural parish bordering the Atchafalaya River. This second installment of the series gets into a little more of the overall situation in the country, which is a state of chaos due to anarchist riots and terror attacks. Unlike my Pulse and Darkness After series, the problems that arise in this series are human-caused, and not too far removed from reality considering some of the recent happenings in that have been in the news.

These first two installments are just the beginning of a bigger storyline that I will be exploring in the upcoming books in the series. If you like survival action and adventure, be sure to check out Feral Nation - Insurrection at the links below the cover image: 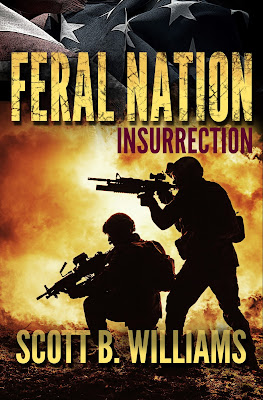