I recently received an email from Bryan at http://www.survivaltop50.com/ notifying me of an interesting list he has compiled of the Top 50 Survival Blogs he has uncovered from around the web.  The list can be viewed by clicking the link above or this banner, a small version of which I have placed permanently in the sidebar at the bottom of this page:

Needless to say, I was pleased to learn that Bug Out Survival made the list, even though I haven't been around as long as many of the more well-known bloggers established in this subject area.  Survival Top 50 ranks blogs based on things like their Google page rank, Alexa ranking, and Yahoo Inlinks.  Since these things change all the time, a particular blog's rank on this list will fluctuate.  Bug Out Survival was ranked at No. 27 today.  Of course, that most popular survival blog of all, JWR's Survival Blog, is right up there at No. 1, followed closely by The Survivalist Blog. Check out the list for yourself and see how many of your favorite blogs are there.  Most of those in my blog list on this page are included, but through this list I have also discovered some new ones I didn't know about, and maybe you will too.
Here is what Bryan has to say about how the blogs on this list are chosen and how they are ranked:
For Readers
These are the top 50 blogs in the survival niche. By keeping their blogs up to date with news, ideas, and fresh and valuable content they provide you with the very best survival information. Share this list with everyone you know who is interested in learning survival.

For Advertisers
The top 50 survival bloggers are some of the most influential in the survival niche. Getting your name and product in front of these survival bloggers and their audiences can bring increased awareness of your company and bring additional sales. If these guys don’t know who you are then you need to let them know!

For Bloggers
These are your friends. These are people as dedicated to learning and sharing information about survival as you are. The SurvivalTop50 lets you quickly see how your blog ranks compared to your peers. Oh yeah, and we hope the SurvivalTop50 sends you tons of traffic!

How are the survival blogs ranked?
The entire ranking is objective and for fun. The real goal of SurvivalTop50 is to bring exposure to great survival bloggers. However to make them rank we show Feedburner for fun and doesn’t affect rank, and then alexa, yahoo, and google each get 10 points towards a total of 30. The better your blog does in the eyes of google, yahoo, and alexa, the better you will rank here.
Posted by Scott B. Williams at 10:08 AM 6 comments:

Kel-Tec CNC, Inc. continues to introduce interesting and innovative firearms, some of which I've posted about here before, from the much older Sub-9 folding 9mm carbine to the recent high-capacity .22 Magnum semi-automatic pistol: the PMR-30.

Now the engineers at Kel-Tec have designed the company's first shotgun - a Bull Pup pump action weapon with dual side-by-side 7-round magazines under the barrel that allow for a capacity of 14 rounds of 12-gauge plus one in the chamber.  Though not a bug-out gun due to it's bulk and impracticality for hunting, it looks like an impressive weapon for fending off the post-apocalyptic Zombie hordes, or for my use, perhaps as a good boat gun to deter would-be uninvited boarders:


I learned of this new shotgun from a Guns America email that included a write-up and this video describing the new weapon:

The KSG Bull Pup Shotgun is supposed to be released in the fall, but Kel-Tec is usually later than what is announced when it comes to actual availability of their new designs. It should be interesting when it does become available though. MSRP is expected be around $800.00. Here is the description from the Kel-Tec website:

The KSG is our first entry into the shotgun market.  The size, shape and design are similar to the currently available Kel-Tec RFB rifle, but the KSG ejects downward, instead of forward.  The KSG weighs 6.9lbs and is as compact as legally possible with a 26.1" overall length and an 18.5" cylinder bore barrel.  Even with this compact size, the internal dual tube magazines hold an impressive 14 rounds of 12 gage 2-3/4" rounds (7 per tube).  The simple and reliable pump action feeds from either the left or right tube.  The feed side is manually selected by a lever located behind the trigger guard.  The lever can be positioned in the center detent in order to easily clear the chamber without feeding another round from either magazine.  A cross bolt style safety blocks the sear, and the pump release lever is located in front of the trigger guard.

The pump includes an under Picatinny rail for the mounting of a forward grip, or a light or laser.  The included top Picatinny sight rail will accept many types of optics or iron sights.  Forward and rear sling loops are built in, and a basic sling is included.  The soft rubber butt pad helps to tame recoil.

A reader emailed the other day asking about some of the more widely available machetes that might substitute for the better quality Latin American machetes such as the ones I wrote about in my post Some Favorite Machetes.  He was specifically looking for an 18-inch blade model and mentioned the ubiquitous Ontario Knife Company's LC-18. 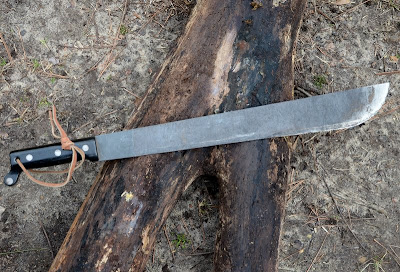 This particular machete has been in production for over 60 years, manufactured to U.S. government specs with a full-tang 1095 carbon steel blade and shatterproof handles.  The LC-18 is a good size for a general purpose bug-out or camping machete, with 18-inches of blade and a compact overall length of 23.25 inches.  The blade is hefty enough for good cutting power, though not as springy or well-balanced as some of the more refined Latin machetes that I described in the above-referenced post.

My experience with these Ontario Knife machetes goes back to way before I started adventuring as they were available in most any hardware store or sporting goods store, unlike the best imported blades.  When I did eventually set off on my first long-distance sea kayaking trip, which led me down among the islands of the West Indies where the machete is an everyday tool, I had in my gear an 18-inch Ontario Knife machete.  The blade served well as a camp tool and for opening coconuts and other essential chores demanded by the life of a traveling beachcomber.  When I returned from that trip and launched my kayak in Canada to paddle part of the old fur trade route and then work my way back south by way of the rivers and lakes to Mississippi, I once again carried that same 18-inch machete.  I'll never forget the hassle I got from a young Canadian customs agent who did not want to allow me into Canada with the machete, which he deemed a deadly weapon.  Fortunately, his older superior understood my need for it in the wilds of the North Woods and declared it a "utility knife" rather than a weapon.  I would have certainly felt lost without it, but once again it served well on that 2600-mile solo journey.

All those years I carried this basic machete I was content with the service I got from it and probably would not have switched to better blades had I not been introduced to them while working as a land surveyor and later while traveling in Central America.  So while it may not be the best available, this tried and true machete would still be my choice over most of the gimmicky "survival" machetes sold today that have poor balance and poor cutting abilities.  Best of all, the Ontario Knives LC-18 is cheap and readily available.  I found it listed on Amazon for just $22.95.  It's listed as the Ontario Knife 1-18 Outdoor Survival Machete

here but on the Ontario Knife website it is designated the LC-18.  A Nylon Sheath

is available separately for $9.50. You can also find these at most military surplus stores. Give one a try, and you may find that it's all the machete you'll ever need.
Posted by Scott B. Williams at 8:35 AM 8 comments:

Title Change for Could You Survive?

There's been a last-minute title change to my soon-to-be-released book that was to be called: Could You Survive? 13 Deadly Scenarios and How Others Got Out Alive.  Changes like this are somewhat common in the publishing world and as an author I've learned not to get too attached to a particular title or things like a cover design.  The content of the book remains unchanged, and that's the part that's important to me.  Those in the business of marketing and selling books know more about choosing titles than me anyway, but this change comes at the request of one of the larger bookstore chains.  These retain chains carry a lot of weight in this business as their initial orders have a lot to do with a book's success or failure and I've been pleased to see that Bug Out has been doing quite well in the bookstores as well as on Amazon.

At any rate, the new title is similar:  Getting Out Alive: 13 Deadly Scenarios and How Others Survived.  Here's the new front cover image, and also the back cover image, which I saw for the first time today.  The changes should be updated on Amazon in a few days, and the finalized version of the book has been sent off to the printer and should be available next month as planned, though I don't know exactly what day. 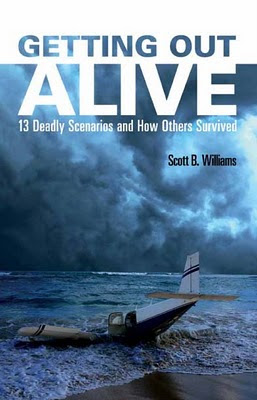 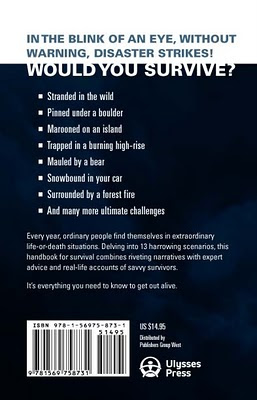 For those readers here who also have your own related blogs or websites and may be interested in seeing this book early, my publisher will soon have advance e-galley copies available for your review.  Contact me with a link to your site to be put on the list.
Posted by Scott B. Williams at 7:31 PM 4 comments:

Email ThisBlogThis!Share to TwitterShare to FacebookShare to Pinterest
Labels: Getting Out Alive, other books, survival in general
Newer Posts Older Posts Home
Subscribe to: Posts (Atom)