Some Thoughts on Bugging Out by Boat

I know boats aren't for everyone, and many readers live in regions where there is no need for one and other means of travel are more suited.  But if you are anywhere near a coastal area, large lake or rivers or streams, boats of many varieties can be a great option.  The primary advantage of bugging out by boat is that a boat can get you places that can only be reached by boats, so the act of taking to the water immediately separates you from the vast majority of people who do not have boats.  This can be a real life-saver in a bug-out situation.


Below: That's me landing my sea kayak on an uninhabited Gulf Coast island. This small kayak can easily carry two week's suppy of food, plus all your but-out gear. 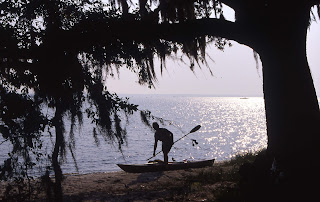 I'll be looking at the pros and cons of all sorts of boats in future posts on this blog, and in my book as well there is a discussion of different kinds of boats that could be used for bugging out, ranging from simple, open canoes all the way up to fully-self sufficient cruising boats.
I will also look forward to sharing some of my experiences about my travels on the water here, and what I learned about what works, what doesn't and why.  I've traveled thousands of miles by sea kayak and by canoe, including a 13-month journey down the coast of Florida and through the islands of the Caribbean, and a trip down the Mississippi River that began in Canada along the old fur trade route.  I've built more than 15 boats and counting, ranging from dinghies and kayaks to the 26-foot cruising catamaran I'm currently finishing up.  You might say I'm a bit obsessed with boats and I will freely admit it.
Below: That's me in mangroves of the Florida Keys in 1988, two months into a kayak trip that extended over 13 months. The kayak was a  Necky Tesla, 17-feet long, built in Kevlar. 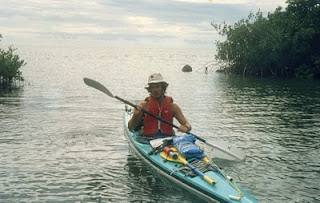 Below:  A 17-foot camp-cruising catamaran I built from plans by James Wharram Designs.  Perfect for cruising the shallows around Florida's remote Big Bend area of the Gulf Coast. See morebout this boat here. 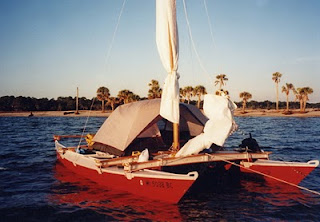 Below:  The first Mississippi Backwoods Drifter, a 12-foot, double-ended John Boat I designed and built for negotiating the small, twisting creeks around here.  Paddles like a canoe but offers stand-up stability and can carry a good load of gear and supplies. See more on my Drifter page here. 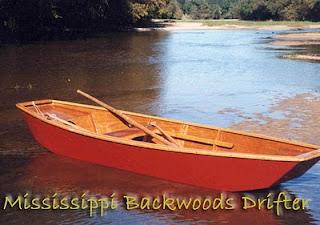 Below: My 26-foot cruising boat, Intensity, which I lived aboard at times and sailed widely on the Gulf until I lost her to Hurricane Katrina in 2005. See more here. 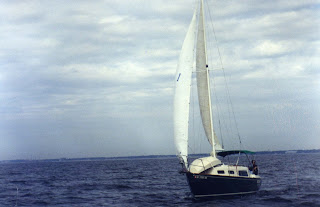 Below: The replacement for my lost boat - a twenty-six foot catamaran that can go anywhere offshore, yet with only 18-inches of draft get into shallow estuaries and rivers, all while carrying enough stuff to be self-sufficient for months. More about this here on my construction blog. 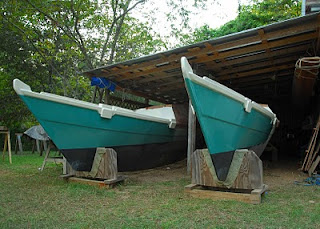