Leon Pantenburg, the man behind the excellent site, Survival Common Sense, recently sent me a test sample of some wallet-sized firestarter packages he has developed.  He first contacted me about these in response to my post, Minimal Bug Out Kit for Everyday Carry.  He probably felt sorry for me for still carrying the old bulky Fire Stick firestarter that I've used for years.  Leon's wallet packs are much more compact, barely taking up any more space in your wallet than a business card.  They come sealed in plastic packages, with instructions on the label: 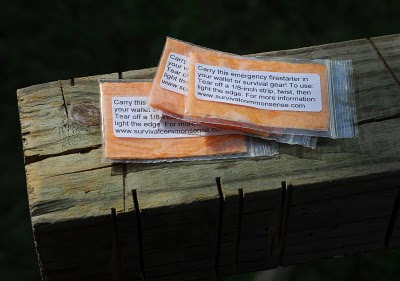 When you take the material out of the package, you can see it is some kind of impregnated fabric: 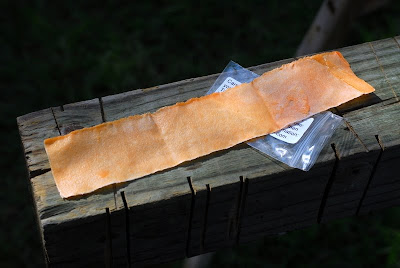 The instructions say to tear off a 1/8-inch strip, twist, and then light the edge.  I did that when I first received the package, but Leon insisted that to give these a real shake-down, I should first soak one in water for a couple of days.  I did better than that.  I opened one of the packages and weighted it down in the bottom of a pan of water, forgetting about it for a week.  Today when I took the above photos, I removed this fourth package from the water, thoroughly soaked, as you can see here: 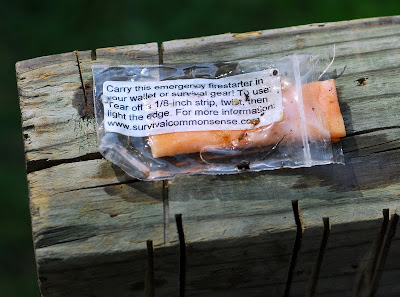 Following the instructions, I tore off a strip and twisted it a bit, then lit it with my Bic lighter: 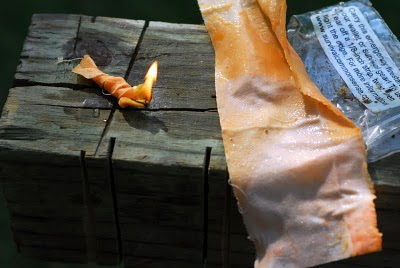 I had no problem getting it started, even though I didn't bother to shake or wipe the water off the twisted strip. It sizzled and popped, but burned with a fury.  So then I lit the whole piece from the soaked package: 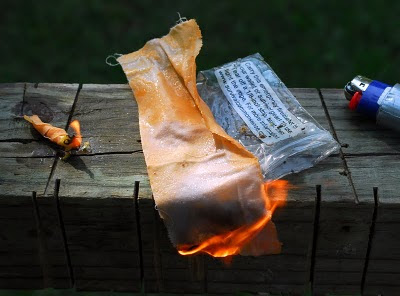 You can see the first piece is still burning fine, and the larger strip is flaming with a vengeance.  I had to throw it on the ground and stamp it out before it set the 4x4 post I was using for a bench on fire!   I would say this is a pretty good initial test.  I haven't used the firestarters on a trip yet, when getting a fire going really counts, but they are now part of my kit and will be put to use the very next time I build a campfire.

Leon says the idea for a wallet-sized survival firestarter came to him several years ago when he did a story on some lost snowmobilers who with no gear and no training got stuck in deep snow in the Oregon backcountry and nearly qualified for a Darwin Award because of it.  With no idea how to find tinder or dry wood, they tried cash and even credit cards in their attempt to start a fire, but did not succeed.  They survived only because they were found in time by a search and rescue team.

He says he developed this wallet-sized firestarter over a period of several years and now includes them in all his survival kits.  As he says, it's light, absolutely waterproof and works every time.

Leon plans to start selling these firestarters from his website sometime in the future, saying they will likely go for about $5 for a package of three, plus shipping.  I think he's got a winner here and I look forward to seeing this on the market as all of us who are interested in survival, prepping or wilderness travel have a need for a compact, reliable firestarter.
Posted by Scott B. Williams at 5:42 PM