Book Review: Lost in the Jungle 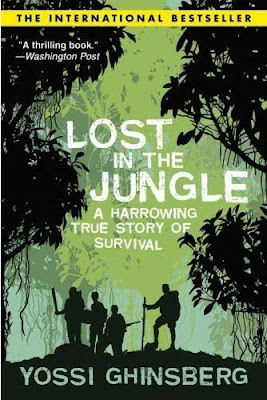 One of the great fringe benefits of writing books is that I get to read a lot of good books in the course of my research.  I've been reading lots of first-person narratives of near-death survival experiences lately while working on my current book project which will be completed in the next two months.  One such book is Yossi Ghinsberg's Lost in the Jungle

.   At one time, back when I was obsessed with getting to the jungle for the first time myself, I read anything and everything I could find related to jungle travel.  Now, having been there and done that  more than once, it began to have less appeal, and somehow I passed on Ghinsberg's excellent book a couple of times when I picked up the original hardcover edition in the bookstore and flipped through the pages.

I now realize the mistake I made after recently reading this book, which I couldn't put down once drawn into the narrative.  Lost in the Jungle is in fact a gripping account of a lone man with little knowledge of wilderness survival facing one of the most unforgiving wildernesses in the world - a trackless swath of the Bolivian Amazon along the remote and inaccessible Tuichi River.

Here is a Google Earth view of the area where Ghinsberg was lost.  Note that not only is it an unbroken tract of virgin rainforest, it is also rugged and mountainous, the rivers cascading in whitewater rapids through treacherous canyons. Try to imagine what it would be like to try to walk out of such a jungle, alone with nothing but a lighter, a poncho and a few remaining morsels of beans and rice, your feet peeling from jungle rot and not even a machete to aid in gathering food or cutting a path:


Ghinsberg is extremely fortunate that he lived to write his book. Two of the four companions he started out with on his ill-prepared trip were never heard from again.  In the first part of the book as you read his account of how they ended up in such a predicament, it's hard to have much sympathy for any of them as you see mistake after mistake being made.  But once Ghinsberg is alone and telling of his terrifying experiences after getting swept through raging rapids on a log raft when he becomes separated from his remaining companion, his descriptions of the difficulties the jungle presents and his methods of dealing with them with practically nothing win you over to his side.  He turns out to be an incredibly tenacious survivor against odds that few experts would care to even contemplate.  Even with his inexperience, he manages to find food, shelter himself from torrential downpours, survive a flash flood that nearly sweeps him away, extricate himself from quicksand bogs and fend off a prowling jaguar in the middle of the night.

I think the most important lesson this book has to teach is the role of attitude and the will to live in an extreme test of life or death.  Ghinsberg refuses to give up, and near the end of the narrative, when he knows he can't walk out, he resigns himself to the possibility that he may have to wait months before someone comes along on the river.  Even with this dismal prospect, he starts making plans to survive alone like a modern-day Robinson Crusoe of the jungle until he can get out.  It is little wonder that today he makes his living as a motivational speaker.  More about what he is doing now can be found on his website here:  http://www.ghinsberg.com/
Posted by Scott B. Williams at 9:02 AM