If you've read my Bug Out book, you know that a lot of the prime roadless bug-out locations that I describe are along rivers or in swamps, lakes or coastal marshes - especially in regions like the Gulf Coast Southeast (Chapter 5), the East Coast (Chapter 6) and the North Woods (Chapter 8).  Many of these locations will be inaccessible to you if you don't have a boat of some sort, and some of the most remote areas are only accessible by the smallest boats such as canoes and kayaks that can be carried over or around obstructions.

The folks who are most likely to need the bug-out strategy in the first place are those in some of the larger urban or suburban areas of these regions, many of whom live in apartments or other situations where storing boats is problematic.  There are many solutions to such obstacles, but it occurred to me that many readers here may not be aware of some of the options available, like the PakCanoe, a folding canoe that I have personally had quite a bit of experience with in some really tough conditions.

Folding kayaks have been around for a long time, based as they are on the original kayaks from the Arctic that were built with a skin-on-frame construction.  Folding canoes are more difficult to engineer because of the lack of decks, which add rigidity and tie the hull sides together.  But Alv Elvstad, the designer of the Pak Boats line of folding canoes and kayaks, has overcome the difficulties and has been producing a proven folding canoe for quite some years now. 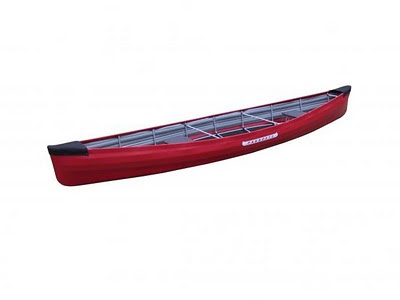 These canoes range from shorter solo craft to the 17-foot tandem expedition canoe like the one shown above.  They consist of a take-down aluminum frame that assembles much like the aluminum poles in a modern tent, and a skin of tough PVC coated fabric with a Hypalon bottom like those found in a Zodiac inflatable dinghy.  These canoes are not fragile as you might think at first glance.  Instead, they excel in handling whitewater rapids and absorb the bumps and blows of rocky rivers better than many hard shell canoes. 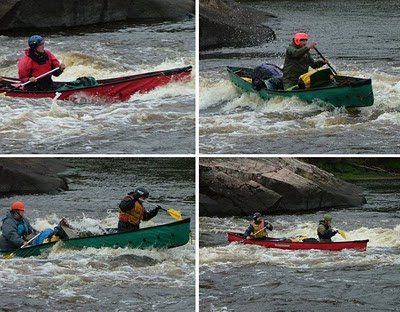 The best part about these boats is that they can be disassembled and stored in a closet in your apartment or kept in the trunk of a car or otherwise carried on a larger bug-out vehicle until you get to where you need a boat.  My experience with the 17-foot PakCanoe began in 1995 when my friend and fellow Mississippi writer Ernest Herndon and I decided we wanted to canoe the remote Patuca River in the Mosquitia Region of Honduras.  If you ever saw the movie or read the novel, The Mosquito Coast, this is the river part of the story takes place on.

You don't get to a river like the Patuca by driving to the boat ramp. The upper reaches of this river are surrounded by mountainous jungle.  To get there, we hopped a ride on a missionary bush plane out of La Ceiba, on the coast, to a Rus Rus, a Miskito Village near the Rio Coco, which forms the border with Nicaragua.  There's a dirt road that leads from Rus Rus a bit farther up the Coco to the village of Auas Bila, and from there we had to travel by motorized dug-out up the Coco to a place where a foot path leads through a pass in the mountains separating the Rio Coco from the Rio Patuca.  We could not have carried any sort of rigid canoe on this trip, the first obstacle being the bush plane flight, and then the trip up the Rio Coco, which has many rapids, then the two day trek on a muddy trail through the jungle to the Rio Patuca.  But with the PakCanoe stored away in two duffel bags in addition to all our camping gear and food supplies, the trip was doable with the help of some Miskito guides we hired at Auas Bila.

Here's a photo of the giant dugout we took up the Rio Coco, along with our guides and the bags containing the canoe and gear.  The village outboard for the big canoe is not yet mounted here: 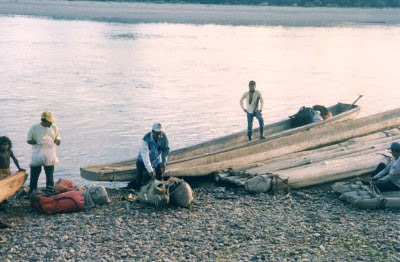 The assembly site at the end of the trail connecting the Rio Coco with the Rio Patuca.  The guides had to use their machetes to make a clearing big enough for us to camp and put together the 17-foot boat.  There was no sandbar or other opening on the river bank here.  You can barely see the rolled up red canoe in the photo below, almost swallowed up in all that tropical greenery. 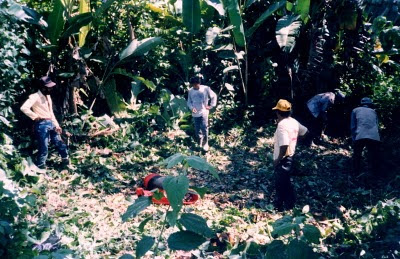 We said goodbye to our guides and set off paddling down the Patuca, our destination the village of Brus Laguna, on the Caribbean coast of Honduras.  Once we started moving downriver, the scenery opened up like this: 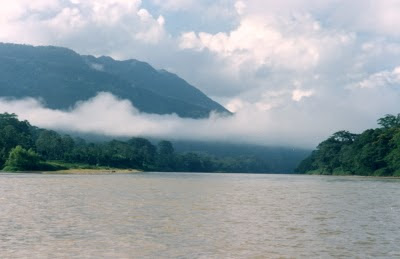 Here's a shot of Ernest Herndon with the PakCanoe somewhere on the Patuca.  We made it all the way to the coast without issues with the boat.  It carried the load well, handled minor rapids we encountered, and allowed us to make a decent daily mileage, though not as much as we would have made in a sleeker fiberglass or wood canoe. 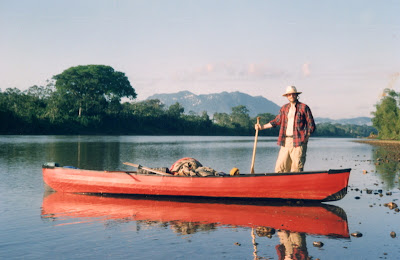 At the end of the journey we disassembled the boat on the beach at Brus Laguna and once again loaded it in a small plane for a flight back to civilization. The trip was a success, made possible by this well-designed and well-built folding canoe.  Ernest ended up keeping the boat and we later used it on a trip down the rock-strewn Ouachita River in Arkansas, among other places.

Everything has downsides, of course, and the PakCanoe is no exception.  For one thing, it's expensive, as are all quality folding boats, whether canoe or kayak.  The other drawback is long-term durability, which is going to be less than most hard-shell boats.  Ernest patched the hull time after time over the years, but eventually gave up on it after it reached the end of its useful life.  It wasn't too much of a loss as we didn't have to front the expense of buying it for our trip because the designer sent it to Ernest for free, as he was seeking reviews at the time and we gladly obliged him by testing it.

In many bug-out situations, long-term durability may not be as important as having a boat right now when you need it.  The main thing is having the means to reach an inaccessible location until  you can do better, so if you live somewhere that doesn't accommodate a rigid canoe or if you drive a vehicle you can't carry one on, you may want to look into the PakCanoe or one of the similar folding sea kayaks.  I'll be writing about those here as well in a future post.
Posted by Scott B. Williams at 3:46 PM