I've written both here and in my book about the utility of a good machete in the bug out bag, as well as for all types of wilderness travel and just work around the house or camp.  I thought I would post a few pictures of some of mine.  Here are the two I use most often.  Both are Latin American style blades, heavy in the tip for effortless trail clearing in the jungle, and made of good, springy steel that takes a razor edge. 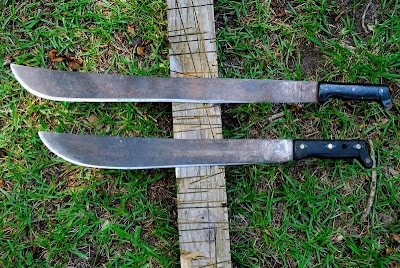 I brought the shorter one back from my last trip to Honduras, and it has become an everyday favorite.  I bought it from a street vender in San Pedro Sula for the equivalent of about 7 bucks, if I remember right, including the handmade leather sheath you will see in the photos that follow.  It's just the right size and weight for a bug-out bag machete, and it goes with me every time I camp and most times I enter the woods.  It measures 23 1/2 inches overall and has an 18-inch blade.   The manufacturer's label on it says "Montero."  I've never found one like it here in the U.S., although I did find this reference on a similar one by the same company.  If I had known how good it would prove to be, I would have bought a dozen of them at that price.

The longer one is a "Collins" style machete made in Colombia.  This is the one I used off and on for years when I did some land surveying work with my brother all over the swamps and thickets of the South.  The longer and heavier blade is good for cutting sight lines all day, as the weight of the blade does most of the work if you use proper technique.  This machete can cut down small trees with no problem and has been a real workhorse.  Unfortunately, I can't find these anymore either.  I bought this one at Forestry Supply in Jackson for about 30 bucks, I think.  This one has a 22-inch blade, but they were available in longer and shorter lengths at the time.  It's in need of a new handle, but the blade is good to go for many more years. 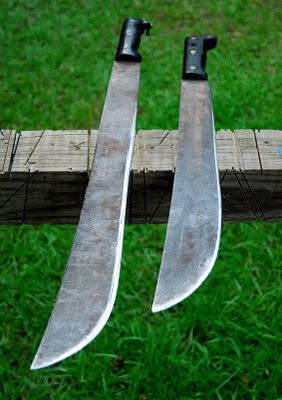 In this next photo, you can see these two compared with a much longer blade.  This is a machete I bought off of one of our Miskito Indian guides on the Rio Patuca trip that I recently posted about.  All these fellows carried blades like this, even though most of them were well under six feet tall.  They preferred the long blades for cutting through the jungle all day and of course they used them for everything else that they needed a knife for as well.  This blade is worn down to this slender profile by repeated sharpening over the years.  It probably at one time had a heavier section near the tip, like the other two.  On that trip I saw many machetes that were sharpened to nearly a needle point and had only an inch or so of blade width remaining for most of their length.  This kind of machete may be too long for a bug out bag, but these guys didn't have bags at all and didn't even use sheaths.  The standard method of carry in the jungle when the blade is not in use (which is rare) is lying in crook of the arm, edge up, ready to come into play in an instant.  This method is also safe when negotiating muddy trails, since it keeps the blade away from you in a fall. 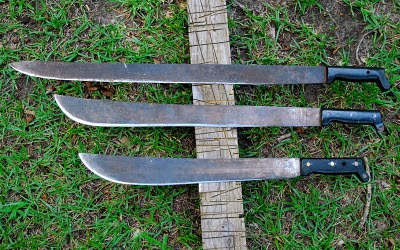 Here's a couple more shots of the two Monteros from Honduras.  The well-used one is mine, and the new one is the second one I bought and gave to my dad, which he has used as a wall hanger and preserved in pristine condition. 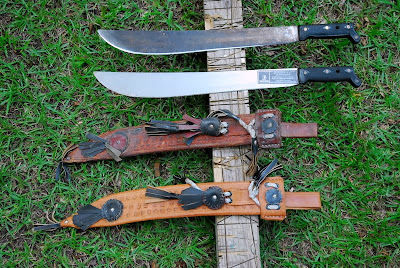 These fancy leather sheaths go with the territory in many parts of Latin America, and though a lot of it is decoration, the tassels don't really get in the way and the leather of the sheath is heavy duty and very well put together.  The only wear mine has shown is the discoloration you see here that gives it character.  Both of my working machetes live in the tool box of my truck, requiring little thought in the way of care and only a few strokes of a mill file to keep them sharp.  If I'm sitting around a campfire with time on my hands, I might get out the diamond sharpener and hone them to a razor's edge after the filing, but it's not necessary for most tasks these blades are meant for.

I've tried a few other machetes available locally and some have been quite good, while others were a disappointment.  One that served well on my long kayak trips was the Ontario Knife 1-18 Military Machete

.  This one is basically the same dimensions as the Montero, though not quite so well balanced and a bit heavier.  Still, it's a tough machete that can take a lot of abuse and it's readily available and inexpensive, as well as the right size for a bug out bag machete.
Posted by Scott B. Williams at 9:02 PM