I'm leaving tomorrow on a road trip to the Florida Keys; kayak on the roof racks and camera gear packed for some paddling, sailing, snorkeling and photography.  I've got assignments to write several magazine articles related to this trip, for magazines such as SAIL, Multihulls, Southwinds and Sea Kayaker.

The kayak I'm taking is my 17-foot Arctic Tern, which I built in 1998.  In the background are the nearly completed hulls of my Wharram Tiki 26 catamaran. 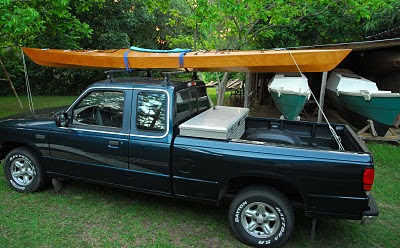 Two of these magazine articles will be about the main reason I'm going there - to attend the annual Spring Wharram Catamaran Rendezvous in Islamorada.  As some readers may be aware, I'm currently building my own Wharram Tiki 26 (pictured above) - which to me is about the perfect bug-out vessel if one were inclined to really get out of Dodge and cross some big water safely.  Read more about Wharram catamarans on the designer's website here:  www.wharram.com

Wharram sailors are a different breed altogether from the usual "yachtie" types one typically thinks of when thinking of ocean sailboat cruising.  These are boats designed to be built by most anyone in their own backyard, and as fancy or cheap as you care to go.  Most people interested in the designs like cheap, and some of the catamarans built to these plans are "interesting," to say the least.

Of course, sea kayaking in the Keys will bring back many memories as well - as I have done two long-distance paddling trips that took me through the area, and have found many great little hideaway camping spots among the mangrove jungles and isolated patches of beach out of sight of the Overseas Highway.

The rendezvous itself is an example of how these boats attract a like-minded crowd of self-sufficient and outside-of-the-box thinkers.  Wharram sailors from all over Florida and many ports much farther away congregate in an anchorage to raft up, share sea stories, compare notes on boatbuilding and outfitting details, and generally have a good time.  I'm looking forward to joining them.

Speaking of far-ranging Wharram sailors, I just got word from a friend that Glenn Tieman, who has been working his way slowly across the South Pacific on a Wharram "double-canoe" that he built in California, has reported in after four months with no word at all from him.  He described his experiences among the remote atolls he's been lost among as being "off the planet."  Here's a photo of his boat, named "Manurere," which is Maori for "Bird on the Wing."  This photo was taken in the Marquesas almost a year ago:  Glenn's boat is truly at home in this environment, where the concept of sea-going double canoes originated.

Well, the Keys won't be that exotic, but definitely better than nothing and at least the water is clear, the diving is good, and coconut palms are abundant.  This will be about the only real break I'll get this summer, as when I return, I will be back to the grindstone working to finish my next book manuscript, which is due in September.  I'm also looking forward to receiving my author's copies of Bug Out, which I just learned today will be shipped to me on the 18th, so I should have them by the end of next week, and those of you who pre-ordered from Amazon should be seeing yours soon as well.
Posted by Scott B. Williams at 8:02 PM