I just received an interesting email from a former Mississippi resident, Leon Pantenburg, who now lives in Oregon and publishes a great online survival resource:  Survival Common Sense.  Leon describes himself as a "wilderness enthusiast" in his bio, but if you read it, you'll agree that this is an understatement. He's done some awesome trips, including paddling the Mississippi River from the headwaters to the Gulf in a canoe and backpacking all over the West in some of the finest wilderness areas in the country.

Leon sent me a few topics he'd posted on his own site and invited me to share them with my readers here.  I found this article on getting drinking water from vines especially interesting, as I have used the method myself.  Here in the jungle-like woods of the Deep South, large woody vines, or lianas, are common.   Most of the largest ones are some variety of wild grape, but there are others as well. Many of these bear the delicious wild grapes called "muscadines" in these parts, and are eaten as is, used in jellies and preserves, and for making excellent wine.

.  This article was written by Kummerfeldt, with the notes in italics by Leon.  These are Leon's photos as well, taken near the Big Black River on a recent trip back to Mississippi.  Hope you enjoy this as much as I did:


If you live in the southeastern United States, or in any jungle-like tropical area, here is a tip for finding a drinking water source. Like any survival tip, experiment and check this out before you need it! 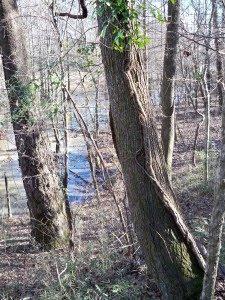 Water can be obtained from vines. Water-producing vines varying in size from pencil thickness up to the thickness of an adult man’s forearm can be found throughout much of the southeastern United States.
When selecting a vine as a water source, look for those with a larger diameter. The greater the thickness of the vine, the more water it is capable of producing. A sharp knife, or better still, a machete, will be needed to sever the tough, woody vine. Start by cutting into the vine.

Vines that exude a white latex sap, or those that produce a colored or foul smelling sap, should be avoided.

If no sap is noticed, or if the sap that is observed is clear and without aroma, remove a 24-inch inch section by severing the higher end first and then the lower end. If the lower end is cut first, the water contained within the vine is drawn up by capillary action and far less water will drain out by the time that the upper end is severed.

Once removed, the section of vine is held vertically and the water contained within it will drain into a container  (perhaps a cupped hand) where it should be further evaluated. 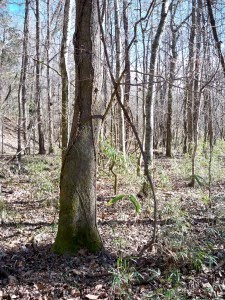 Liquid that is colored should not be consumed. Liquid that has an unpleasant aroma, other that a faint “woody” smell, should also be discarded. This water could be used to satisfy any hygiene needs.
Taste a small amount of the water. Water that has a disagreeable flavor, other than a slightly “earthy” or “woody” taste, should not be utilized for drinking. Hold a small amount of water in your mouth for a few moments to determine if there is any burning or other disagreeable sensation. If any irritating sensation occurs, the water should be discarded. 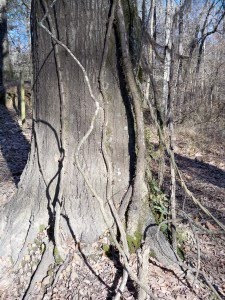 Another note from Leon: A recent trip to the great state of Mississippi gave me the chance to test this survival technique for finding water in vines.  Walking through a beautiful deciduous forest near the Big Black River wetlands, I noticed many vines hanging from trees. They’re called “wild grape” vines by the Warren County locals, even though the vines don’t bear any fruit.

My first reaction was to grab one and see if a person can really swing through the trees. Instead, I took out my Leatherman, locked in the saw blade and followed Peter’s instructions. The vines produced beautiful, clear water that tasted great!

I'd like to add that as a kid growing up in Mississippi and spending as much time as possible in the woods, my friends and I often played "Tarzan" by following through with what Leon thought about.  First you have to cut the vine loose near the ground, and hope the many tendrils wrapped far up in the branches of the host tree will hold your weight.  Some of these vines allowed some really long and exciting swings.  The fun stopped one day when one of our group of pre-teen boys named Kervin Farr plummeted nearly forty feet into a big gully that we were swinging across - breaking both of his legs and ending up in a wheelchair for a few months.  So be careful!

More information on getting water from vines and other plants can be found in the "Tropical Rainforest Survival" section of the excellent book: How to Survive on Land and Sea