In a recent post here I listed the three knives (including multitools) that I find most useful and essential for everyday tasks and therefore keep close by if not on my person at all times.   They are: the Victorinox Tinker (Swiss Army Knife), Leatherman Wave Multitool, and Cold Steel Voyager XL folder. The latter is in a different class, as it's a big folding blade designed more for knife fighting than for use as a tool.  I'll post more on that later.

It may seem redundant to include both the Swiss Army Knife and the Leatherman Multitool, but they are configured differently and the size and weight of the Leatherman makes it less of a pocket item and more suited to carry on the belt pouch.  As a result, the Swiss Army Knife is the one that's in my pocket right along with the change and the truck keys every time I leave the house, while the Leatherman may stay in the fanny pack on the truck seat where I keep my Glock, Surefire flashlight, Firesteel and other gear close by.

A recent forum thread here debates the question of which of these two tools you should have:
http://www.survivalistboards.com/showthread.php?t=94519

There are some good points made there, but I see no reason not to have both.  Here is the Victorinox Tinker: 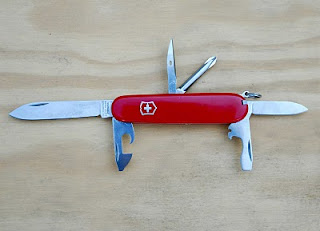 I picked this model because it is slim and lightweight enough when closed that you hardly feel its presence in your pocket, yet it has what I consider the most essential basic tools: two different knife blades, a can opener, a bottle opener/flathead screwdriver, a Philips screwdriver, and a reamer/awl tool (as well as the plastic toothpick and tiny tweezers that come with practically all these knives).  With this knife on me at all times I can do most light cutting tasks as well as some assembly/disassembly of things held together with screws, like for example removing the butt stock from my Winchester Trapper carbine so it will fit inside the bug-out bag.  I like having two knife blades as I can spare the edge on the larger one for cutting things that won't dull it and use the smaller one for other work that is more abusive.  Both are sharp though, and just yesterday I sliced open my index finger with the small blade while opening a box.
The Leatherman Wave offers a lot more in terms of both cutting blades and other tools.  In this first photo we have the two knive blades, a saw blade, and a file/rasp combination.  The plain-edge knife blade is longer and sturdier than the largest blade on the Swiss Army Knife.  It also comes to a sharp point and features a thumb-hole that allows for one-handed opening.  The serrated blade can also be opened one-handed, and is useful for jobs like quickly severing big ropes, cutting away seat belts or other emergency tasks.  The saw is more effective and useful than you would think at first glance, and I've actually used it quite often in boatbuilding jobs where I didn't want to go get a larger handsaw or power tool.  The file and rasp provide all sorts of utility for things ranging from shaping and smoothing wood to sharpening machetes and other tools. 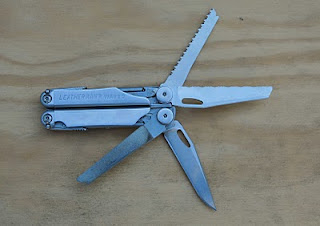 With the blades folded up, the Wave can be reversed to reveal an excellent pair of needle-nose pliers with wire-cutters built in.  The middle part also features a large opening with more aggressive serrations for turning bolts and other big-pliers jobs.   At the other end of the handles, additional fold-out tools include a can opener, a reversible Philips and flathead screwdriver combo, a sturdier single flathead screwdriver, a reversible jeweler's sized flathead and Philips combo, and a pair of small but sharp scissors. 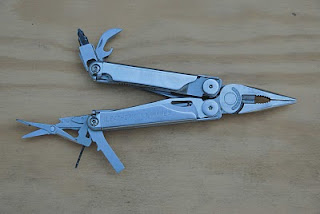 Of course with all these features, I could get by fine with just the Leatherman Wave, and it's certainly worth the trouble to strap it on your belt in the included belt pouch if you're heading out to the woods or off to do a day of outdoor work.  But having both is no trouble at all and the cost is reasonable.  You can get the Victorinox Tinker for just $15.00 on Amazon, and the Leatherman Wave can be had for $60.36

on Amazon (at least that's today's price -which you will see if you add it to your cart).  I received both of these fine tools as gifts, so that's even better, but for a $75.00 investment, I wouldn't hesitate to replace them if I lost them.
Posted by Scott B. Williams at 9:24 AM