Anyone planning to bug out on coastal waters or along rivers or other waterways with reasonably clear water should consider adding a simple bowfishing rig to their gear, as it will take up little room and adds little weight even in the smallest bug-out vessels such as canoes and sea kayaks.

In the photo below (taken a few years back) is a good-sized Sheepshead I shot not far from the beach while camping on a remote barrier island.  These fish tend to congregate around rocks and other structure, and I got into a school of them by wading out an old wreck after setting up my camp ashore. There's nothing like fresh fillets cooked in the skillet on the beach as the sun goes down. The bow is a Hoyt take-down recurve drawing 60 lbs.  This is a versatile hunting weapon, but if you are choosing a bow just for bowfishing, you can get by with something much simpler, and of lower draw weight, since the shooting is done at close range. 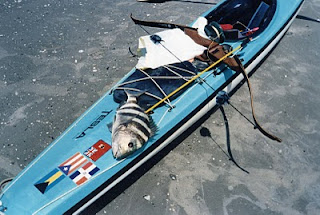 Shooting a bow from a kayak is difficult, if not impossible in most conditions, but it is feasible to bowfish while standing in a canoe, dinghy or John boat.  I've had great success with this method of fishing when cruising on my larger sailboat, especially when anchored in mangrove areas, where I rowed the dinghy up into narrow creeks among the flooded roots and waited for schools of mangrove snapper to swim by. It takes practice to get good at hitting small, often fast-moving targets under the water, but it's well worth the effort if you're in an environment where you can see beneath the surface.

In addition to a suitable bow, you will need at least one fishing arrow and some sort of bowfishing reel.  Modern, manufactured bowfishing arrows are usually made of solid fiberglass so they will be heavy enough to penetrate a few feet of water and still have enough energy to impale a fish.  They are tipped with a barbed point that can be unscrewed from the shaft since the barbs prevent pulling the arrow backwards out of the fish.  Fletching is not even needed at the typical close ranges at which bowfishing is done, but most fishing arrows are fletched with heavy-duty, waterproof plastic vanes for flight stabilization.  For the reel, I prefer the simple, open-faced design that looks like a handreel and screws directly to the front of the bow in the threaded receiver most modern bows come with for adding stabilizers.  Here is an example of one of these I found on Amazon for just $11.85 Bohning Bowfishing Reel With Line

You can get a complete kit with an arrow for less than 30 bucks: Sting-A-Ree II Bowfishing Kit

Fancier designs are available with reels that are more similar to those used for angling, but for this kind of fishing I like the simplicity of the hand reel.  There's nothing to break or get tangled and it packs away easily when not in use.  I will be posting more on bowfishing, and archery in general in future posts, including details on primitive equipment that can be self-made and can be just as effective.
Posted by Scott B. Williams at 9:32 AM