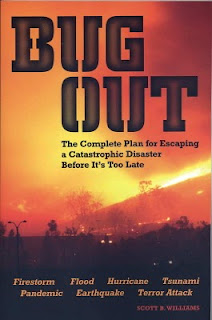 I've had a few inquiries from readers asking about the availability of Bug Out in bookstores, so I wanted to give you an update from what I've found out so far.  First of all, the book may be in your local big chain bookstore, but perhaps not where you would expect to find it shelved.  If you look at the category that it's classified in on Amazon

, you'll see that it's in Nonfiction>Current Events>Disaster Relief, rather than in a category such as Outdoor Survival Skills or Wilderness Survival.  This is also true of a few other survival books related to a breakdown or collapse type scenario.

How individual bookstores organize their inventory is mystery to me and probably to anyone else who is not a bookstore manager, so if you are looking for this book or any other related one, the best thing to do is ask an employee or look it up on the self-serve computer system.  Besides, if they don't have it, any bookstore can order practically any book in print, so they can get if for you if you don't want to order it online yourself.  What I found in my local stores is that Barnes & Noble had none in stock, Borders had several copies in the outdoors/hunting/survival/hiking/camping/etc. shelves, but Books-A-Million placed the book up near the front of the store, in the Political and Social Sciences section.  In the same area I noticed several other related titles that are are also on Amazon's Top 100 list in "Current Events" along with Bug Out.

Speaking of which, I'm delighted with fact that readers are finding the book useful and some are posting reviews around the web in various places.  Two more recent ones are from Mayberry, over at Keep It Simple Survival, and from Scott Finazzo at Lure of the Horizon.

Most of you here are familiar with Mayberry's writings and surely know that he is a man who doesn't mind telling us how he really feels about something.  Here's his take on Bug Out, and I'm sure glad he liked it, because if he didn't he would have no problem trashing it, which is a good thing and how it should be.  Note that he's also collecting names for a drawing to give away a free copy of the book tomorrow:

You may not have heard of Lure of the Horizon, but the author, Scott Finazzo, is a fireman and world traveler when he can get the time off, as well as an excellent and insightful writer.  I first connected with Scott when he wrote to tell me that my book,  On Island Time: Kayaking the Caribbean

inspired him and some of his firefighter co-workers to  build some kayaks of their own design and take an adventurous voyage in the Virgin Islands.  He chronicles the trip on Lure of the Horizon, and here is how he describes his blog:

"Lure of the Horizon is not only the title of this blog, it is a strong force in my life. As both a blessing and a curse, the restless soul has an affinity for the horizon; for something more, something new. I cannot change it, I can merely attempt to control it."

Here's his take on Bug Out, and he makes it clear he's not a "survivalist," but anyone traveling the way he does could surely find themselves in a survival situation real fast:

Email ThisBlogThis!Share to TwitterShare to FacebookShare to Pinterest
Labels: book review, the bug out book