Today's post over on Notes from the bunker, Biking Season Approaches, reminded me that I've been meaning to say something about bicycles here for awhile.  This article makes some good points about the utility of bicycles in a post-SHTF scenario, and I covered them briefly in Bug Out: The Complete Plan for Escaping a Catastrophic Disaster Before It's Too Late

.  My current book project, Bug Out Vehicles and Shelters: Build and Outfit Your Life-Saving Escape

, will have an entire chapter devoted to using bicycles as bug-out vehicles, including how to set them up for the purpose and how to get the engine (your body) fit for the task.

Whether you ever need to actually use a bicycle to bug-out or not, riding one is a good idea for many reasons, $4.00 per gallon or higher gas being one, as that post points out.  Another excellent reason is for the physical fitness, which you need no matter what your survival plans are.  I read this just as I got in from a two and a half-hour ride today.  I've been trying to put in at least three good rides per week to make up for all the time I'm having to spend at the keyboard working on these book projects.  In my last post, I mentioned an overnight trip on my KLR 650 dual-sport motorcycle.  Here is a photo taken just today of my other favorite two-wheeled transportation during a break in today's ride. 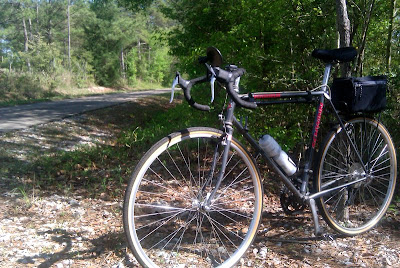 This one is a Schwinn Voyager that I purchased new in 1994, along with a full set of front and rear Cannondale panniers.  This was one of the last quality Schwinn touring bikes sold here when they were still making them with high-quality lugged Chro-Moly steel frames and decent components.  The Voyager was specifically designed for loaded touring, with relaxed geometry, a triple chain ring for a wide range of gearing, and brazed-on eyelets for front and rear racks and three water bottle cages.  Despite its age, this bicycle has been utterly reliable for many thousands of miles and has the right blend of comfort and speed to make long,  unloaded training rides enjoyable as well.  Schwinn no longer makes a bike like this, but if I had to replace it today, viable touring options with similar build quality would be the Trek 520, Surly Long Haul Trucker, or perhaps the REI Novara Safari.

A touring bike like this can really eat up the miles day after day, as long as you are in decent shape to ride it. While many other types of bicycles, including mountain bikes can be set up for touring or for bug-out vehicles, I prefer the road touring designs as they make it easier to maintain a decent average speed, especially in hilly or mountainous terrain.  Most touring bikes can be fitted with wider, semi-knobby tires for use on gravel or other rough surfaces.  The extra-strong, but flexible Chro-Moly frame absorbs shocks from bumps well, and holds up to carrying heavy loads. I'll post another photo of this one with the luggage attached next time I load it up. It will easily carry as much or more as you could carry in the largest backpack, yet do so at a speed that allows one to travel 40 to 100 or more miles per day, depending on terrain, fitness, weather, etc.

For a good overview on some things to consider when choosing a bicycle, here's an article that covers the basics of the many different types, as well as some points on frame construction materials: Bicycle Recommendation Short List
Posted by Scott B. Williams at 8:16 PM

Email ThisBlogThis!Share to TwitterShare to FacebookShare to Pinterest
Labels: bicycles, BOV, Bug Out Vehicles and Shelters