Book Review: Will To Live: Dispatches from the Edge of Survival 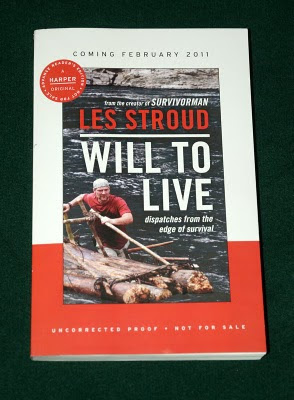 The title of Les Stroud's new book covers an aspect of survival that I've posted about here several times in the past: the importance of the right mental attitude and the unstoppable determination to make it out of difficult situations in spite of seemingly impossible obstacles. See these posts: On Maintaining a Positive Attitude, and Can't Never Could.  In addition to what I've said about the importance of the mental aspects of survival here on Bug Out Survival, my new book, Getting Out Alive: 13 Deadly Scenarios and How Others Survived

, drives home this point in every chapter. In examining the stories of how the most improbable survivors made it through extreme ordeals, we often find that it is attitude that plays a much bigger role in the outcome than learned skills, experience or equipment used.

Ironically, I was writing Getting Out Alive last year at apparently about the same time Stroud was working on his book between his numerous trips all over the world to film his TV series Beyond Survival.  I found out about the book a month or so before it's February 1, 2011 release when the publisher sent me a review copy as I was correcting the final proofs of my own book.

Obviously, books like Will to Live: Dispatches from the Edge of Survival

are of great interest to me, and I've been reading survivor stories like these since I was a kid dreaming of big game hunting trips and jungle adventures. Back in those days I found such stories in the pages of magazines like Sports Afield, Outdoor Life and The Reader's Digest.  I read them all and learned what I could from them.  Later, I began devouring book-length travel narratives written by outdoor adventurers doing their thing in some of the most exotic parts of the world, and such reading fueled the fire that made me have to get out and do the trips that led to my own books.

Les Stroud is best known for his television shows such as Survivorman, but is also the author of Survive!: Essential Skills and Tactics to Get You Out of Anywhere - Alive

. I've enjoyed several episodes of Survivorman from time-to-time, but I'm not much of a television watcher and rarely spend time viewing survival shows or anything else on TV. But his extensive travels for his television work have taken him into a wide range of environments and circumstances in which to test and develop his skills, and it shows through in Will To Live.  Much of the book is first-person narrative in which he relates such adventures as his time spent among the Waorani in the Amazon, interwoven with the stories of real-life survivors and what they endured.  In each case study in which an epic account of survival is related, Stroud finds ample opportunity to share his related personal experience and to offer tips and advice in sidebars sprinkled throughout each chapter.   These sidebars also include checklists of gear that should have been carried by participants in some of the activities that got them into trouble, such as a Survival Kit for Rafting, Sea Survival Kit, and Car Survival Kit.

Many of the real-life accounts will be familiar to readers here, as  I have posted in the past and written in my own books about Yossi Ghinsberg's jungle survival ordeal and the death of Chris McCandless who perished in the Alaskan bush during an experiment in living off the land.  Another chapter focuses on the story of Nando Parrado who survived 72 days in the Andes after a famous plane crash in 1972 and later wrote about his epic struggle along with his fellow survivors against cold and hunger in his book, Miracle in the Andes. In each of these chapters examining the accounts of survivors, Stroud points out both the mistakes made and the things that were done right.

If you're looking for an entertaining read that you can also learn from, I highly recommend Will To Live.  Among the various bloggers and forum posters in the survival and prepping community, from time-to-time I run across comments advising readers to pass on books like this because they're not worth the money or would not be a necessary addition to the survival library.  I would suggest that you ignore such advice and consider that a book like Will To Live (currently listed at $11.85 on Amazon) offers a whole lot of entertaining reading with the bonus that you might learn something in the process.  Consider that most magazines these days run around $7.00 an issue and are filled with much more advertising than real articles, not to mention that most people toss them after one reading.  All of us with an interest in survival topics have the usual how-to books on the shelf, and you should make them a priority as well if you're serious about learning.  But make some room for related entertaining reading as well, and you might be surprised when one day you find yourself in an extreme situation and some small bit of knowledge you acquired from something you read about another person's ultimate test resurfaces just when you need it most.
Posted by Scott B. Williams at 8:52 AM