Next Book: Bug Out Vehicles and Shelters

As I've mentioned recently, I'm currently working on another book project that will be a follow-up to Bug Out: The Complete Plan for Escaping a Catastrophic Disaster Before It's Too Late

.  Some of  you may already be aware of the title if you've visited my author's page on Amazon lately, as the new book is now listed on Amazon along with the cover.  Here is the first version of the cover, which will be changed as the vehicle shown is not really representative of the type of vehicles the book describes, but was simply used by the designer to have something to tie the concept together: 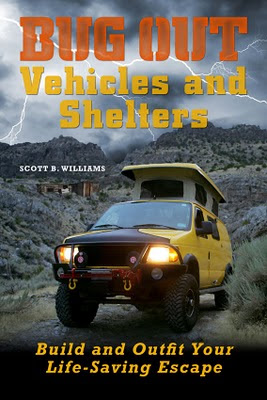 As you know, the original Bug Out covers bug-out vehicles and transportation options in Chapter Four.  I feel this subject easily merits expansion into a full-book, however, as your means of getting out of a danger zone to your safe bug-out location is a large part of any bug-out plan.

Bug Out Vehicles and Shelters: Build and Outfit Your Life-Saving Escape

will cover not only the kinds of vehicles you might chose to make your escape, but also those vehicles that can be set up to become mobile retreats on their own.  These escape vehicles and mobile retreats will include options for overland travel as well as on the water, depending on your particular needs.  In addition, there will be a section on a variety of shelters both movable and fixed that can be set up in advance in your bug-out location.  This sort of pre-planned bug-out retreat will enable you to be even more prepared for a stay away from home than you would be if you were simply carrying everything on your back, and will also make the bug-out option more viable for families.  As was touched on briefly in Chapter Four of Bug Out, there will be a section on additional equipment or back-up alternatives such as bicycles, ATVs, canoes, kayaks, etc. that can be used when conventional vehicles cannot.

The reason I feel a book is needed on this subject is to provide much more detail in how to choose, outfit and use these various options.  It is this kind of knowledge and preparation that will make your bug-out plan work and that will separate you from the refugees who might be haphazardly fleeing a SHTF scenario with no idea where they are are going.

But whether they are ever needed or not, unlike many other forms of prepping, you'll likely find that researching, acquiring and setting up bug-out vehicles and shelters can be an enjoyable form of recreation in an of itself.  Writing about them is equally enjoyable, but it's hard to sit at a computer and do so without wanting to shut it down and bug-out if only for a few hours, as many of these vehicles are also a great means to escape the everyday world and head out into the woods or onto the water.  But since it is scheduled to be published in September this year, I've got a lot of work to do.  Look for updates in the coming weeks and months.
Posted by Scott B. Williams at 9:00 AM

Email ThisBlogThis!Share to TwitterShare to FacebookShare to Pinterest
Labels: BOV, Bug Out Vehicles and Shelters, bug-out boats, bug-out vehicles, bugging out, other books