I suppose since I write about bug vehicles and bug out locations, I could call a recent motorcycle trip to North Carolina and Tennessee work - or at least research.  But truth is that a short getaway trip to the mountains, camping off my KLR650 was really more of a great way to unwind after a few long weeks of  finishing up the revisions and final details of my latest book - the novel that will be released in July.

I've written about the Kawasaki KLR650 here before, and I'm sure many readers have either owned one or know somebody that does.  It's not a motorcycle that excels at any one thing, but rather one that does everything well enough.  For this trip, that meant everything from surviving the truck traffic on the interstate at 75 mph, to negotiating twisty pavement in the mountains, such as the infamous "Tail of the Dragon" stretch of North Carolina's Highway 129.  But most importantly, it meant the freedom to explore off-road on gravel forest service roads and beyond.

I went alone on this ride so I wouldn't have to do much scheduling or planning, and besides,  I needed time to myself anyway.  Mainly, I wanted to revisit some of my favorite areas in the regions, such as the Joyce-Kilmer and Citico Creek wilderness areas, where I've embarked upon many a solo backpacking trip in times past.  Hiking this time was limited, but with the KLR I was able to get to some nice, secluded campsite with the bike and all my gear, some of them places few four-wheeled vehicles could reach. 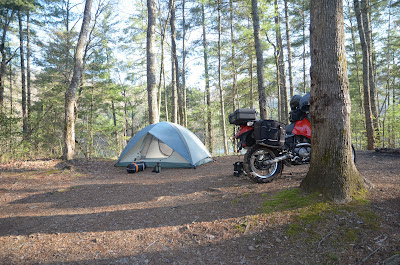 As anyone who's visited this area knows, the driving (and especially motorcycle riding) is spectacular.  Going in the off-season and during the week makes it easy to avoid the crowds.  One of the most scenic roads is the Cherohala Skyway, which runs through some of the wildest areas of the southern Appalachians, from  Tellico Plains, TN to Robbinsville, NC. 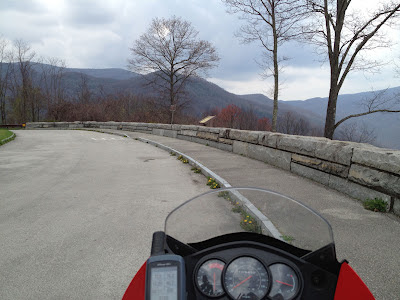 This is a view out into the Citico Creek Wilderness Area, which is described on p. 158 of my book: Bug Out: The Complete Plan for Escaping a Catastrophic Disaster Before It's Too Late.  A black bear encounter I had one dark night deep in the middle of this wilderness reminds me to choose campsites carefully and take all the precautions to keep a clean camp when in these mountains.  This a place where you can seriously disappear if you have a need to, especially if you don't mind bushwhacking into the rhododendron thickets in the deep ravines along the drainages. 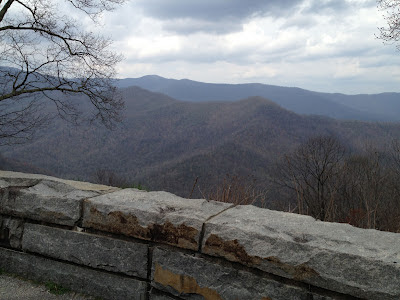 But as nice as the paved mountain roads like the Cherohala Skyway are, the KLR really comes into its own and proves its worth on the endless miles of gravel forest service roads that lead off the beaten path. 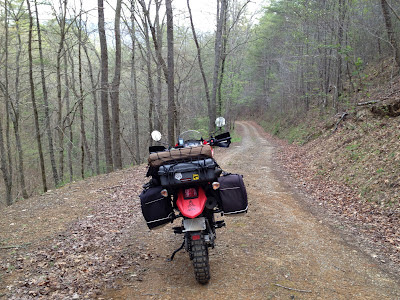 Exploring them leads to all kinds of great places, like this fantastic stream.  One thing these mountains are not short of is water, so carrying a lot of it is not necessary as long as you have a means to purify it. 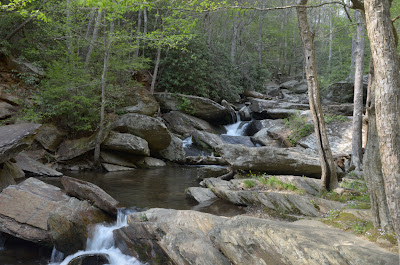 It's hard to leave a place like this and ride back home, but after this little escape I'm now planning a longer motorcycle trek out West to some of my favorite hang-outs there, like New Mexico's Gila National Forest.  I have no doubt that the trusty KLR will get me there and back.
Posted by Scott B. Williams at 8:28 PM