I've been working on the chapter covering human-powered watercraft this morning for my book project: Bug Out Vehicles and Shelters

and one of the topics I am covering are the different methods of propulsion for such watercraft.  Everyone thinks of paddles and oars when it comes to moving small boats, but the simple pole is often forgotten. While poling may be the most primitive way to move a boat known to man, it can also be extremely efficient in certain conditions. 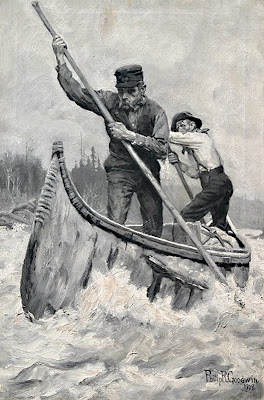 I first began to appreciate the value of poling when my canoeing buddy, Ernest Herndon and I traveled downstream for several days on the Rio Coco, which forms the border between Honduras and Nicaragua.  On that trip, we hired some Miskito Indian guides and one of their long dugout canoes carved from a log to travel downriver, but all along the way we passed other locals poling their dugouts back upstream between the widely scattered villages along the river.  The Rio Coco has a considerable current and some treacherous rapids in some places, but despite this, once they dropped us off at our destination, our three guides would have no way home but to pole their way back up river, staying in the shallows near the bank.  I don't know how many days it took them to get that heavy, 30-something foot canoe back to their home village, but it couldn't have been easy, considering that it was a four-day journey  with all five of us paddling it downstream with the current.

But in places like Mosquitia, where outboard motors are still rare and gasoline for them is rarer still, if you would use the river as a highway through the jungle, you must be able to travel upstream as well as downstream.  This is also true if you plan to seriously contemplate bugging out into remote wilderness areas where no other boat but a canoe or kayak can go.  On my own long-distance kayak trips, I have had to travel some stretches of river upstream for a few hundred miles in order to reach a divide and cross over to another river where I could go downstream.  It's slow going and a work-out, but an efficient sea kayak can be paddled against the current, especially if you know how to play the eddies.  A canoe is not so easy to paddle against the current as a sea kayak though, and the bow will frequently get swept around when you least expect it, making for frustration as you lose ground you worked so hard to gain.  By standing up and using a long pole to push off the bottom, you are able to put your entire body into the effort and the result is that you can make remarkable progress, even in swift water.  The experts make it look really easy.  I especially like this video I found YouTube, and watching it makes me want to shut down the computer, throw the canoe on the truck racks, cut myself a long pole and go!  Have a look for yourself and see if you don't feel the same way: