Could You Bug Out on a Harley?

will feature a chapter on motorcycles and the key considerations you must take into account if you were to choose the two-wheeled option for bugging-out.  Needless to say, researching this book has been interesting.  One story I've been following for a few months is Doug Wothke's winter bike building project, in which he converted a stock Harley Davidson 1200 Custom Sportster to a capable dual-sport motorcycle he calls the "Dirtster," (and XL GS). 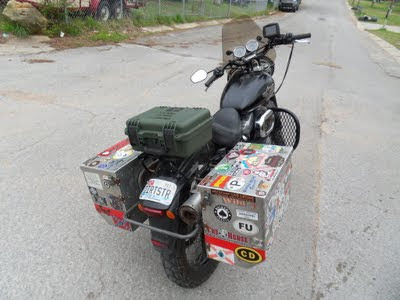 Doug (rtwdoug) on the Adventure Rider (ADV) Motorcycle forums, is well-known for his outrageous long-distance adventures on unlikely motorcycles.  He's ridden an Indian Chief and two Harley Davidson choppers most of the way around the world, and has taken more conventional adventure bikes like the KLR all over places like Africa.  Doug, who lives over in neighboring Alabama, takes a big adventure trip every summer, and this customized Sportster was built to take him across Europe and Asia and the extreme eastern end of Siberia, to Magadan, hence the need for improved suspension, knobby tires and a bigger fuel tank.  Here is the route, outbound leg in brown, return in white:

He chose the 1200 Sportster for it's near bullet-proof Evolution engine, which is simple, requires little maintenance other than oil changes, and produces loads of low-end torque like all Harley V-Twin engines.  The Sportster frame is better in this application than the bigger bikes since it is lighter and more agile and has the best power-to-weight ratio of any stock Harley.  Doug began with this 2003 100-year Anniversary Edition: 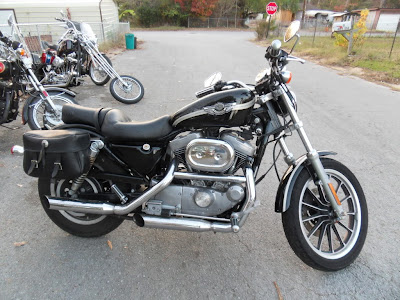 Modifications included converting the belt drive to a chain drive, to avoid the chance of breaking the belt due to small stones getting between it and the pulleys, which can happen on gravel roads. The front forks were exchanged for KTM forks, and rear suspension switched out for longer travel and a taller stance.  Forward controls were dispensed with for rear-set mid-controls with off-road style pegs.  The exhaust system was upgraded to the get pipes up where they would clear the water on river crossings, and tires were switched out for knobbies.  The stock 3.3 gallon fuel tank was replaced with a custom 4.2 gallon tank for more range.  Sportsters get up to about 50 mpg., so it's good for around 200 miles between fill-ups.  Other additions were things like the dual headlights with protective grill, the custom engine guard, racks for aluminum panniers and the Pelican-type waterproof top box: 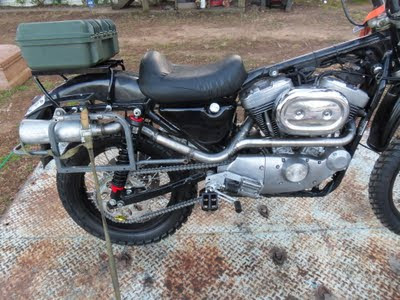 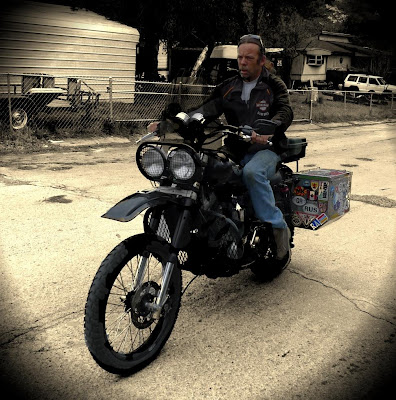 Doug has begun his journey and is posting updates in this thread on the ADV forums:
http://advrider.com/forums/showthread.php?t=681994

Shortly after completing the build, he posted this YouTube video of a test run down a muddy, north Alabama road:

Examples like this show that sometimes the best vehicles for a particular purpose are not anything you can go out and buy off the showroom floor.  While Doug could certainly  do this trip on a KLR 650 or a BMW GS 1200, there's something to be said for the satisfaction of doing it your own way and highly modifying an existing machine.  I'm not the mechanic Doug is, but I know from my own experiences with boats, that the way to get exactly what I want is to build my own, which is what I'm doing in the case of my Tiki 26 catamaran.  I just thought I'd share this interesting journey for those who might be contemplating motorcycles as bug-out vehicles or back-up vehicles.
Posted by Scott B. Williams at 8:49 PM

Email ThisBlogThis!Share to TwitterShare to FacebookShare to Pinterest
Labels: BOV, Bug Out Vehicles and Shelters, motorcycles