The new edition of the Cold Steel Voyager XL, one of my favorite large folding knives:


In this post about Three Knives for Everyday Carry, I mentioned the Cold Steel Voyager XL (5-inch blade model), as I have owned and carried one of these since first running across one in a local sporting goods store back in 1996.  I was immediately drawn to the design the first time I handled it, as the size and balance seemed perfect and I could tell it would easily become an extension of my hand when applied with the Kenpo knife fighting techniques I had learned when I was heavily involved in that art.  But beyond its potential as an excellent close-quarters weapon that was large enough to be effective yet easy to conceal, I felt it could also serve well as a general purpose field knife and over the years this has proven true.  I've used it for skinning and dressing large and small game as well as for camp chores and rigging work while aboard my boat. Because of its light weight, smooth contours when closed, and convenient clip for securing inside a pocket or waistline of anything from sweat pants to swimming trunks, I rarely went anywhere without mine - that is until the clips broke off.

The one pictured in the post referenced above was my second one, as the first version came with an inferior plastic belt clip that once broken, could not be replaced.  This second edition was somewhat improved, with a heavier-duty replaceable metal clip, but the clip was still the weakest point of the knife and eventually I snagged it on something while carrying the knife clipped in a side cargo pocket and broke that one too.  The second version of the Voyager also had an improved gripping surface, but the shape and size was virtually identical, as you can see here in this photo of both knives with broken belt clips: 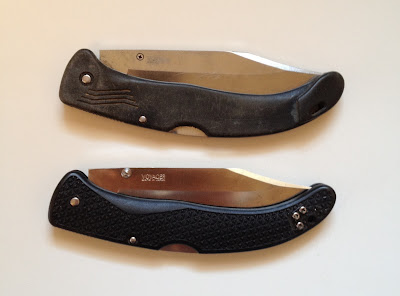 Both of my older Voyagers have the plain edge rather than the half-plain, half-serrated option that was available, as I prefer a blade I can easily keep sharpened to my needs when required.  Like the older model, the new Voyager XL can be had with either a plain or 50/50 serrated blade for the same MSRP of $87.99. Changes in the design include a more secure grip, a new Tri-Ad locking mechanism, a flat ground blade rather than the hollow-ground of previous models, and ambidextrous pocket clips that are more discreet than the old design.

With both of my old voyagers somewhat more difficult to carry and put into action without the pocket clips, I figure it's time to try the new model.  I'll report on it here after I've had time to compare the changes against my old favorites.  You can get one on Amazon for $69.95, and compared to a lot of the competition, that's a bargain for such a versatile folder. If anyone has used the updated model and has some feedback, I'd love to hear from you.

Here's the manufacturer's description of the new Voyagers from the Cold Steel website:

Our Voyagers® are, ounce for ounce, far stronger than 99.9% of our competitor's folders. And this is a fact, not an idle boast. Each knife features precision made parts with a stiff spring and our incomparable Tri-Ad® lock mechanism which is arguably the strongest, most reliable, low maintenance lock in the world!

The thick, extra wide blades are made from Japanese AUS 8A steel and meticulously ground to a thin edge for maximum shearing potential. This thin edge also allows us to hone each blade to astounding sharpness. And, because of the high carbon content of the steel, and their near perfect heat treatment, you'll find this sharpness last a surprisingly long time.

If you like serrations, you'll really appreciate our exclusive pattern. It features groups of very small, sharply pointed teeth separated by wide, shallow arcs so it will rip smoothly yet very aggressively through a wide variety of tough fibrous materials without snagging or hanging up.

The Voyager® Series also offers all the other latest refinements in lock-back construction including lightning quick, one-handed opening, state of the art mechanical fasteners, massively oversized pivot pins that are fully adjustable and properly hardened, and dual stainless steel pocket clips for ambidextrous carry and deployment.

The Grivory handles feature 6061 heat treated aluminum liners for the utmost in strength and stiffness and are ergonomically designed to afford a wide array of grip options including the palm reinforced forward grip for which they are particularly well suited.

Grivory is unparalleled as a handle material as it is considerably stronger than Zy-Ex and, when deeply textured, offers a terrific non-slip grip. As an added bonus, it's impervious to moisture and won't crack, warp or shrink and remains remarkably resistant to abrasion or discoloration.
As tools these lightweight, super sharp knives are appropriate in almost any environment from hunting and camping to hiking and general utility chores. They can also readily fill specialty functions such as a boat or river knife, chute knife or police/military and survival/rescue applications.