Coming in July: THE PULSE: A Novel of Surviving the Collapse of the Grid

Most regular readers here know that I was working on a novel over the last few months since Bug Out Vehicles and Shelters was released.  Some of you may have already seen the book's Amazon page, but if not, here's a preview of the front and back covers.  I'll post more detailed information about this book here soon.  In the meantime, if you'd like a preview, the "Look Inside This Book" feature has been enabled on Amazon, so you can read the opening scenes and see if you'd like to read more.  The book should be available in print and Kindle form early next month. 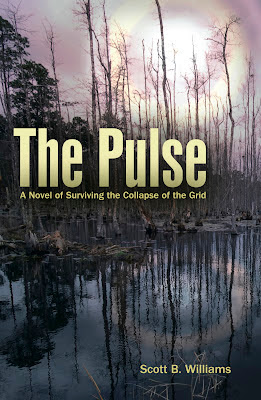 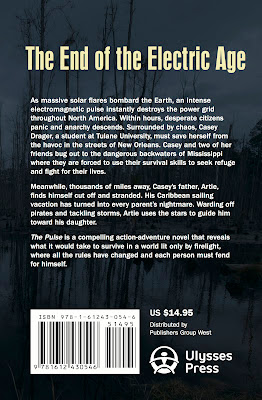 From the back cover:

THE END OF THE ELECTRIC AGE

As massive solar flares bombard the Earth, an intense electromagnetic pulse instantly destroys the power grid throughout North America. Within hours, desperate citizens panic and anarchy descends. Surrounded by chaos, Casey Drager, a student at Tulane University, must save herself from the havoc in the streets of New Orleans. Casey and two of her friends bug out to the dangerous backwaters of Mississippi where they are forced to use their survival skills to seek refuge and fight for their lives.

Meanwhile, thousands of miles away, Casey’s father, Artie, finds himself cut off and stranded. His Caribbean sailing vacation has turned into every parent’s nightmare. Warding off pirates and tackling storms, Artie uses the stars to guide him toward his daughter.

The Pulse is a compelling action-adventure novel that reveals what it would take to survive in a world lit only by firelight, where all the rules have changed and each person must fend for himself.
Posted by Scott B. Williams at 2:35 PM

Email ThisBlogThis!Share to TwitterShare to FacebookShare to Pinterest
Labels: bugging out, fiction, novels, post-apocolyptic, SHTF, solar flare, The Pulse: A Novel of Surviving the Collapse of the Grid