As I've mentioned here many times and in my books, I'm a big fan of the .22 rimfire when it comes to all around hunting and survival weapons.  While there are many circumstances where other, more potent calibers are certainly needed, the lowly .22 rimfire does a good job as an all-around game getter and many experienced hunters and wilderness travelers would agree that if they could only have one gun, they might reach for their trusty .22, especially since so much ammunition can be carried in a small space.  I've always been more of a rifleman than a handgunner myself, and most anyone would have better results putting meat on the table with an accurate long gun than a pistol or revolver, but if one of these two fine rimfire handguns were my own, I think I'd invest the time and effort into getting as proficient as possible with it.

These are not mine, however, but I'm temporarily in possession of them as a friend who is out of the country shipped them to me for safekeeping until he can pick them up.  What you see here is a Ruger Single Six revolver in .22 Magnum, and the classic Colt Woodsman .22 Long Rifle automatic pistol: 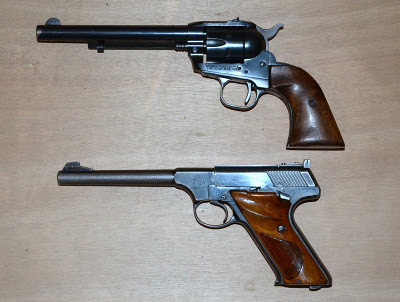 Both of these models have long been popular with serious handgun hunters and marksmen, and either would do a fine job of bagging small game in the hands of a competent shooter.  The Colt Woodsman, in particular has a perfectly-balanced feel in the hand and a silky slick action.  Unlike many of today's lightweight .22 automatics, this is a pistol that is built to last and to be handed down through the generations.  The Woodsman is getting harder to find these days, and if you do find one, it won't be cheap.  Both of these came in old school fitted leather holsters, reminding me of the .22 revolver that was the first handgun I ever fired under my dad's watchful eye: 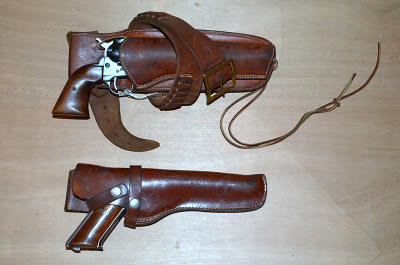 I might get better results with my 10/22 carbine, but I'd sure like to have either one of these in my bug out bag as well if I had to take off to the woods for an extended stay.
Posted by Scott B. Williams at 8:03 PM