I just received several samples of a product I had not seen before that I think will be of great interest to preppers as well as adventure travelers needing a safe and reliable water source in questionable areas.  A box of these samples was sent to me by the editor of Sea Kayaker magazine, a publication I've been contributing to on an occasional basis since they published an account of my solo Caribbean sea kayak journey back in 1990.  I will be testing and reviewing this product for the magazine, so I can't publish the review here until after it appears in print, but I did want to share some photos and a link to the company website with you, and I'll post a link to the article here when it's available.

is a self-hydrating drink pouch/emergency water filter that is claimed by the manufacturer to produce a refreshing drink while removing viruses, bacteria, cysts and parasites from the water.  The small pouch on the left contains six individual packets that produce 12 fluid ounces each when hydrated.  The larger package on the right is a 10-day water filtration system that weighs less than 5 pounds in your pack and is claimed to produce up to 8.5 gallons of safe drinking fluid in the field. 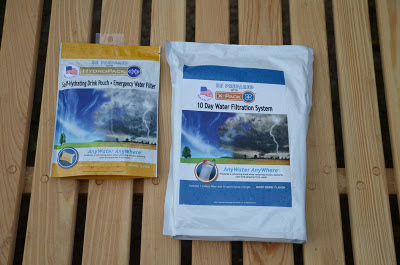 This system, by Hydration Technology Innovations is in use by Marine, Air Force, Army and Special Ops personnel.  If it works as advertised, it could be a useful addition to the bug-out bag in many situations.

Even more interesting to me, the company also manufactures a reverse-osmosis water filtration system that works in a similar way.  Shown below is the Emergency Desalinator foward osmosis membrane filter and the SeaPack Crew Emergency Desalination Pouch 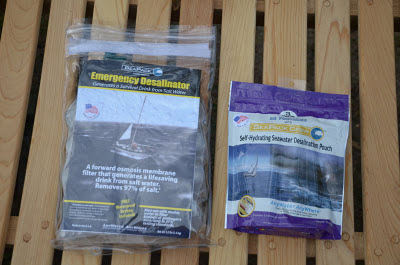 These SeaPack self-hydrating pouches work like the HydroPak pouches for freshwater, but create a clean drink that contains electrolytes and other nutrients from seawater by removing up to 97% of the salt from the water.  All this  comes in a compact package that can easily fit in the storage compartments of a sea kayak or in a life raft or abandon ship bag, without the complication of an expensive reverse-osmosis pump system.  I can't wait to see how it works.

I plan to put all these units to the test in the coming weeks by seeking out the nastiest Mississippi swampwater I can find for the freshwater systems and heading south to the Gulf of Mexico for some salty seawater to sample with the desalination systems.  If they work as advertised, I'll let you know here, and I'm sure I'll be adding some to my gear collection - especially the desalination units.  One can never have too many back-ups when it comes to a freshwater drinking supply when venturing out to sea on small boats.
Posted by Scott B. Williams at 10:05 AM