A Guide to Hiding Out and Eluding Pursuit in Remote Areas 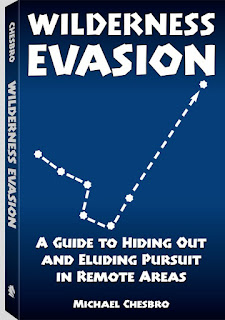 Michael Chesbro's Wilderness Evasion puts a different twist on survival in the wilderness, in that the assumption is that you do not want to be found rather than the usual focus on signaling for help or finding your way out of a wild place on your own. In this respect, it is perhaps the one survival book on the market most similar to my own forthcoming book: Bug Out: The Complete Plan for Escaping a Catastrophic Disaster Before It's Too Late.

Chesbro's book was published in 2002, by Paladin Press, quite awhile before the current surge in popularity of survival and prepardness topics. The overall premise of the book does not focus so much on bugging out from a SHTF situation or smaller scale disaster, but more on an individual need to get out of Dodge for personal reasons. The author cites potential reasons for wanting to disappear into the wilderness - ranging from fleeing a relationship to hiding from Big Brother or even going on the lam from the authorities if you have that need. In his own words: "Quite simply, "wilderness evasion" allows you to drop off the face of the earth for a while."

Wilderness Evasion covers the topics you would expect, based on the title. There are chapters on gear, caches, resupply systems, evading pursuit, covert signals, navigation, survival firearms, shelter, camouflage and survival medicine, among others. The only downside to this is that none of these subjects are covered in much depth, and all of them could be expanded on greatly to create a more useful resource. Some of the information is right in line with what I would recommend - such as choosing the "ubiquitous .22" as the best all-around survival firearm. Other areas are greatly over-simplified, for example, there is a chapter on primitive weapons with a brief description of how to make hunting weapons such as a bow and arrow. Having made quite a few primitive bows, I can tell you that it's not something you get from a couple of pages of description, but at least the fact that these kinds of things are in the book is good. Those who are serious about learning all they can about wilderness evasion and living will be able to delve deeper on their own into some of these specific skills. The bibliography in the back lists some good sources for this.

The information covered here is broken down into short, easily-digestible tidbits - accompanied by a few lists, sidebars and simple illustrations. While not a one-stop reference to wilderness survival while on the move, it is a book that will get you thinking about these things from a different perspective than the typical "how to survive when lost in the woods" book.